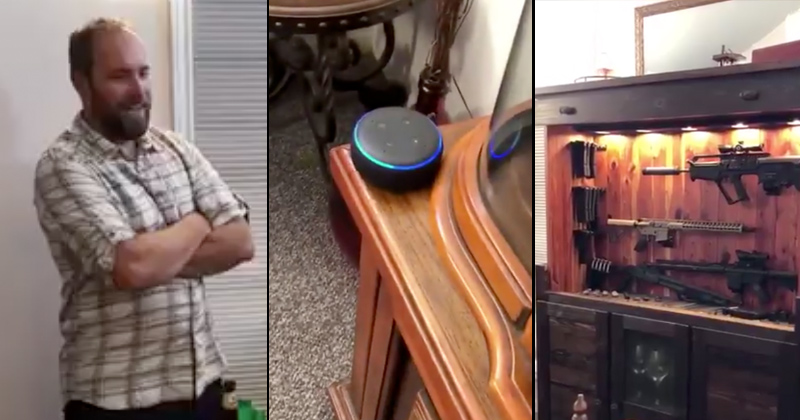 “Alexa, we need guns,” a man tells the device, prompting a small drawer with seven handguns to open up.

Next the man tells the assistant, “Alexa, we need lots of guns,” at which point a larger hidden compartment opens revealing a cache or rifles.

The video initially appeared on Facebook posted by a man from Texas intent on selling it.

“It’s for sale,” the Facebook post reads. “Custom cabinet. Can be used for liquor, wine, or whatever you are into. They will build to suit you. Can 3D print mag well holders for rifles vertically/horizontal.”

The post also details the dimensions of the “buffet-style” cabinet and the type of wood used: “Approx. 54″w x 45″t x 21″ d.” and “Rifle area lined with cedar bead board. Exterior is rustic reclaimed cedar. Steel supporting framework inside.”

In case there was any question as to whether Alexa can really control the cabinet, the seller also notes it’s “WiFi enabled, Alexa supported, phone app also. Rfid secured.”

The man behind the viral post did not respond to Infowars’ request for comment as of writing.

Alex Jones and his son Rex show us how exercising our Second Amendment right is crucial to maintaining sovereignty and preserving personal freedom.