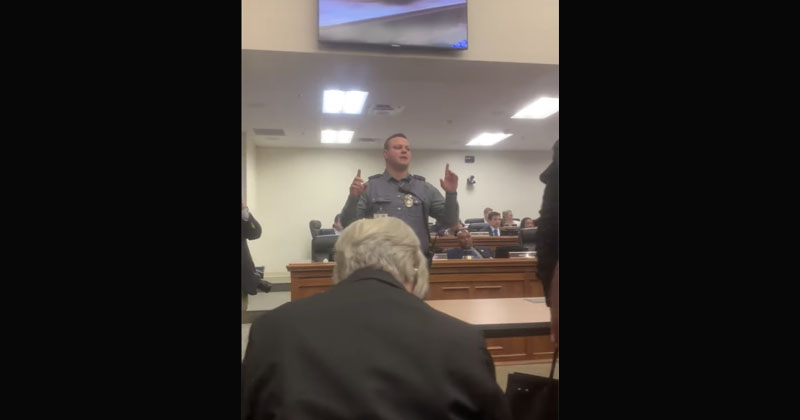 Video footage uploaded to social media from inside the Virginia State Capitol shows a group of State Troopers ejecting citizens from the meeting room of the House Public Safety Committee as lawmakers voted to advance the latest in a series of Bloomberg-sponsored gun control and confiscation bills.

“Up and out” a Trooper can be heard shouting as he removes the public from the open meeting room. “Everybody! Everybody in here sitting it doesn’t matter you need to get out now!”

According to those in attendance, Virginia State Police gave spectators 30 seconds to vacate the room or face arrest.

When the stream resumed, the spectators’ seating area was empty, and committee members carried on with the session.

Law enforcement are asking rowdy crowd to leave. People are yelling at cops asking whose side they’re on. pic.twitter.com/NUQpjyBF6Z

HB 961, sponsored by Northern Virginia Democrat Mark Levine (D-45), executes a ban on “assault weapons,” defined as virtually any and all semi-automatic firearms, including the highly popular AR-15 and similar models.

Additionally, the bill bans “high-capacity magazines,” which are defined as being capable of holding more than 12 rounds of ammunition.

The bill requires registration of existing “assault weapons” under the penalty of felony charges and offers no clause grandfathering in already-owned magazines, requiring them to be destroyed, “removed from the Commonwealth,” or turned over to law enforcement.

Despite massive statewide opposition, the House Public Safety Committee voted 12-9 along party lines to send the bill to the House floor for a full vote.

While the bill is expected to pass the House, there is currently no Senate version, although a previous one was withdrawn last month.

The ban has faced more pushback in the Senate, with at least four Democrats expressing reservations about targeting firearms and magazines.

Owen Shroyer is on location covering the 2nd Amendment rally in Virginia.