A Virginia man attempting to vote in the presidential primary Tuesday says he received a ballot already marked for Republican candidate Marco Rubio.

The voter, who photographed the ballot in question, noted to WTVR News that the issue was highly concerning. 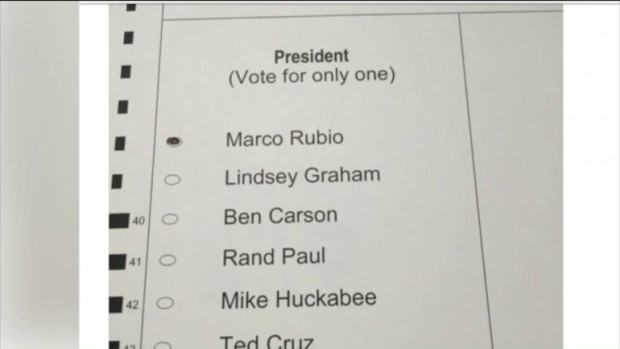 When questioned by reporters, general registrar for the City of Richmond Kirk Showalter argued that “there was no reason for voters to be alarmed.”

Showalter instead blamed a female voter who allegedly filled out two ballots at once, handed one in, and returned the other without telling polling staff that it had been inadvertently marked.

“Two ballots were stuck together when they were issued and the woman they were handed to voted on both of them,” Showalter said.

Other issues in the area included ballots being placed inside of duffle bags instead of ballot counting machines.

“There was a lady working the polls who asked me to put my ballot in a duffle bag. I could see the other completed ballots, so I was trying to conceal mine,” Richmond voter Danyale Little said. “I felt like my privacy was violated.”

Poll workers said the duffle bag was being used for temporary storage after the ballot counting machine key was lost early Tuesday morning.

While reported incidents in Virginia appear to be minor according to local officials, other voters across the country have experienced similar issues with ballots favoring Marco Rubio.

More than a dozen Donald Trump supporters in Texas reported to Austin-based radio station KLBJ Tuesday that their ballots had been changed to show a vote for Marco Rubio.