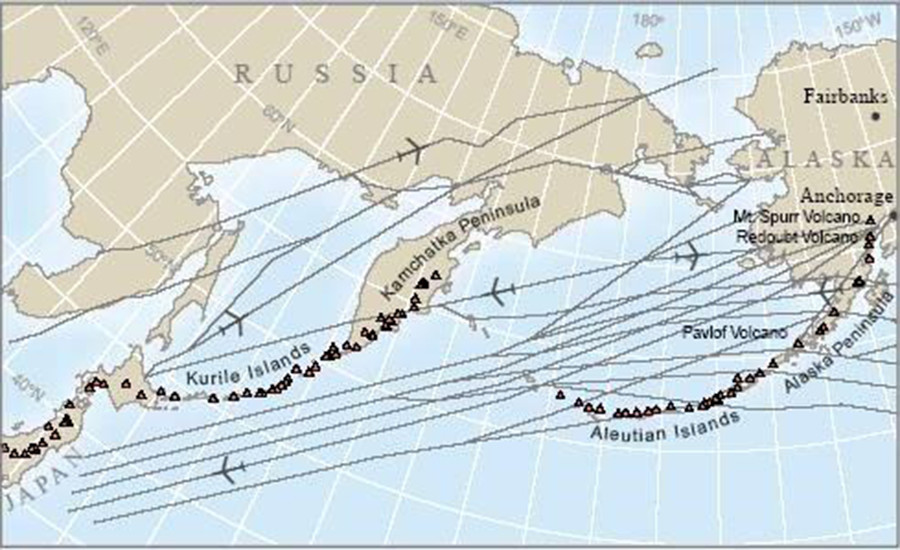 Zoomed in version of the #ash cloud produced by the #Bogoslof Volcano just off the #Aleutian Islands. 7 pm to 8 pm satellite graphics. pic.twitter.com/9QljMSgL58

The aviation code was later lowered to ‘orange’ as no further ash emissions occurred following Sunday’s explosion, and seismic activity was low.

The AVO advised however that further ash producing eruptions could occur at any time and without warning.

Bogoslof Volcano has erupted about 40 times since December, after staying quiet for the previous quarter-century. It took a two-month break earlier this year before erupting again on May 16.

Ash from southwest Alaska volcanos is a major threat for airliners operating between North America and Asia.

North Pacific and Russian Far East air routes, as shown in the image below, pass over or near more than 100 potentially active volcanoes, marked in the map with red triangles.

When ash cloud rises above 20,000ft (6,096 meters) it has the potential to damage and even stop jet engines. Volcanic ash melts at jet engine temperatures, and can cause engine failure, according to the United States Geological Survey (USGS)