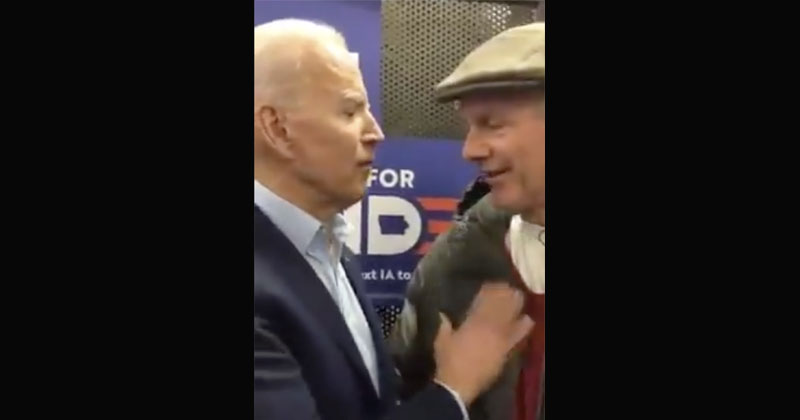 Democrat presidential frontrunner Joe Biden snapped at a former Iowa Democrat representative just days before the first primary vote of 2020, urging him to “go vote for someone else.”

During a campaign stop in Iowa, former state rep Ed Fallon approached Biden about implementing far-left environmental policies, assuring him that he would vote for Biden in the general election against President Trump.

“Go vote for someone else,” Biden replied as he pushed and poked Fallon. “You’re not going to vote for me in the primary.”

Biden to Iowa Voter: “You gotta go vote for someone else”

Biden: “You’re not going to vote for me in the primary”

Voter: “I’m going to vote you in the general if you treat me right”

This is how Biden treats people?pic.twitter.com/CkWj6aQBEw

“I’m going to vote you in the general if you treat me right,” Fallon said.

“Yeah I know.. well I’m not,” Biden snapped as he grabbed the man’s jacket.

“And despite his repeated calls for unity, Biden rejects my offer to support him in the general election. That really shocked me. What was even more shocking was how Biden pushed and poked me, and then took hold of my jacket with both hands as he lectured me,” Ed Fallon wrote in Bold Iowa.

“I’ve said this before, and I’ll say it one more time: Joe Biden is the Democratic candidate LEAST likely to beat Donald Trump. His demeanor on the stump will inevitably come back to bite him, perhaps repeatedly. His propensity to violate personal space is a huge non-asset in politics, and his frequent gaffes are prime fodder for opponents and the media,” Fallon added.

This comes just days after Biden was seen sarcastically mimicking a reporter who was trying to ask about his political snipes at socialist candidate Sen. Bernie Sanders (I-Vt.).

78 days have passed since Joe Biden has held a press conference in New Hampshire.

Currently, Sanders has surged ahead of Biden in Iowa in recent days, with 25% to Biden’s 22%, according to the latest RealClearPolitics poll.

Patrick Howley joins Tom to discuss why the Democrats have still not settled on a candidate to go against Trump and why the globalists will still pick the eventual winner.