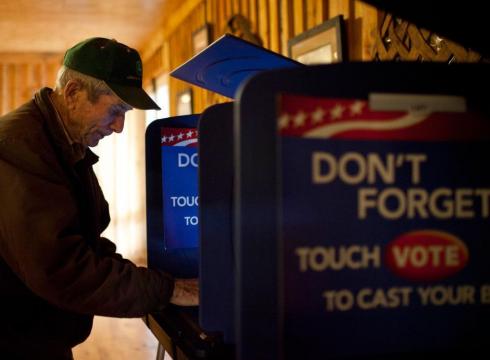 Yet more evidence of voter fraud has emerged, this time in the wake of Saturday’s primary in South Carolina, where it was reported that at least 953 votes had been cast by people who were listed as dead.

“In a letter dated Thursday, Wilson says the analysis found 953 ballots cast by voters listed as dead. In 71 percent of those cases, ballots were cast between two months and 76 months after the people died. That means they ‘voted’ up to 6 1/3 years after their death.”

Wilson has asked the State Law Enforcement Division to investigate the situation.

In addition to stories that have emerged from both Iowa and New Hampshire in the past few days, the revelations once again suggest that voter fraud has become a common occurrence throughout the country.

The Union Leader reported that activists obtained ballots as dead people because they weren’t ID’ed.

One activist posted video of himself walking into New Hampshire Polling locations during the Presidential Primaries, and asking for the ballots of deceased residents. The man had obtained the names from local obituaries.

“The names of the deceased were both Registered Republican and Democrats And in almost every case, saying a dead person’s name, we were handed a ballot to cast a vote.” wrote the activist on his Youtube channel.

None of the allegedly fraudulently obtained ballots was actually cast.

Associate Attorney General Richard Head confirmed his office had learned about the possible fraud on election day and immediately began investigating. “That investigation is ongoing,” he said. “Based on the information received on Election Day and the information on the video, we are undertaking a comprehensive review of voting procedures with the Secretary of State,” the report states.

In Iowa, the results of the January 3rd Caucus have been completely glossed over, despite major questions arising from the vote.

Following the declaration of Mitt Romney as the winner, GOP officials in Iowa recounted the votes and changed the decision, naming Rick Santorum as the victor. However, votes from at least two precincts were lost in the process, and the tallying wasn’t even properly certified.

Both Mitt Romney’s and Rick Santorum’s vote tallies were altered, but no mention was made whatsoever of Ron Paul’s total, despite the fact that he finished a close third, in what was essentially a three way tie.

During the caucuses, multiple accounts emerged from voters in different precincts suggesting that the number of votes did not correspond to the number of Iowans they had counted at the polling station. In addition, for the first time ever, the Iowa GOP decided to change the final vote count to a “Secret location”, citing non specific security concerns.

In total, eight different precincts in Iowa showed signs of fraud that included missing votes and stories that changed every time someone challenged them. Writer Jeffrey Phelps points out that the official caucus website in Iowa publicly states that the caucus results can never be officially certified.

Returning to South Carolina, another story emerged over the weekend that has potential vote fraud implications.

As South Carolina reporter Brandon Turbeville reports, Sevier Precinct President Christopher S. Lawton “noticed a series of situations that were either in direct opposition to State voting laws, or, at the very least, highly questionable.”

Lawton arrived at the Pickens County elections office to witness the vote certification in person, as per State law, but was told he could only witness the tabulation on a projector in the council chambers, not in the room where the actual counting was taking place.

“[They were] very unfriendly and appeared agitated at my presence. When I got my wits I went back and declared State law allowed me to witness all aspects of this process. I was told there was little space and [to] stand out of the way and not be talking on the phone.” Lawton stated.

When Lawton noticed that hundreds of votes had already been added to candidates names before official counting had started, he was told that the votes had been brought in early in the morning, when no one was watching.