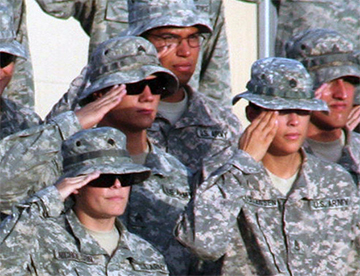 I am not a combat soldier, military police, or special forces. I am an active duty sailor with a background in Submarines and Nuclear Engineering. I thought better to let those active in those fields speak about the purge going on in the military.

However, I do want to mention training we were given over the last few years. Alex Jones has spoken several times about the purge going on in the military.

Imagine looking around the room at active and retired Military, many of whom served 20 plus years, then being told someone in that room may be the enemy. Then we were reminded what the penalty for treason is. All while being bombarded with images of Bradley Manning and other military personnel who attempted to expose government high crimes and murder.

You can imagine the chilling effect this type of threat against the military and civilian contractors might have. You can be sure NCIS and their equivalents all over the country are giving these same presentations.

After the Snowden revelations it should be clear to everyone that the intelligence agencies know who you are, they know what you have said, and they know if you believe in freedom and the United States Constitution.

America is going to have to make a decision.

Will the people stand behind their military and police who attempt to expose corruption and evil. If the people continue to let whistleblowers like Edward Snowden be demonized and persecuted; many insiders will not feel safe exposing what they see.

I often hear, “if that were going on we would hear about it. People would speak out.” Well, people do speak out. Then they lose their jobs. They are called traitors. Not all of us can fly to Japan and set up an interview with the London Guardian.

Not all of us can flee to Russia. Wake up America.