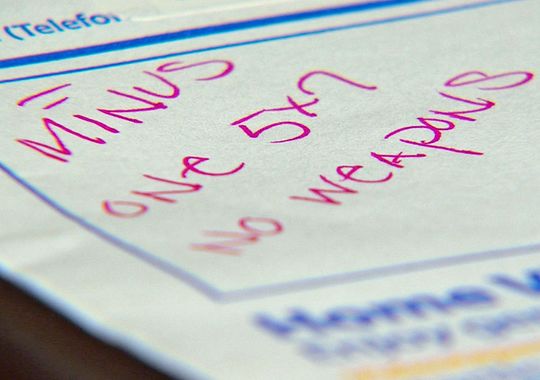 A couple was perplexed after an employee at a Texas Walmart refused to print one of their engagement photos, which featured a shotgun, allegedly citing a store policy against promoting “gang culture.”

Stephanie Wehner recently ordered a set of 13 photos online from Walmart in anticipation of her wedding this weekend, but when she went to her local store in Dallas to pick them up she noticed one particular photo had not been printed.

“One of the 13 photographs submitted included [Wehner’s fiancé] Mitch’s 12 gauge Ruger Red Label Shotgun. He said it was the first gun that he had purchased himself, calling it his ‘go-to’ gun for outdoor sport,” reports WFAA.

When Wehner received the photos she noticed the envelope they came in read: “MINUS ONE 5 X 7. NO WEAPONS,” and found the snapshot featuring the shotgun was missing.

Wehner says the employee also refused to turn over the photo.

“She was very nice, but very matter-of-fact, like she was not going to budge or give me my photo,” Wehner said.

The employee then reportedly cited a store policy against printing photos containing guns, claiming the shotgun promoted a “gang culture.”

“To automatically to be lumped into that category of a gang… that hits a little close to home for us, because that isn’t our intent at all,” said Wehner’s fiancé.

He was also confused because the photo demonstrated proper gun safety.

“I did that in this picture; I made sure the action was open… that is was a safe photograph,” he said.

“We had a new associate who was misinformed. Her actions are not consistent with our policy,” a spokesperson for Walmart said.

The employee’s concern over a harmless photo simply because it depicts firearm ownership highlights the effectiveness of the establishment’s anti-gun rhetoric, which is part of a broader top-down, anti-Second Amendment propaganda campaign attempting to “really, really brainwash people into thinking about guns in a vastly different way,” as admitted by Attorney General Eric Holder at a Women’s National Democratic Club conference in 1995.

“What we need to do is change the way in which people think about guns, especially young people, and make it something that’s not cool, that it’s not acceptable, it’s not hip to carry a gun anymore, in the way in which we’ve changed our attitudes about cigarettes,” Holder outlined.