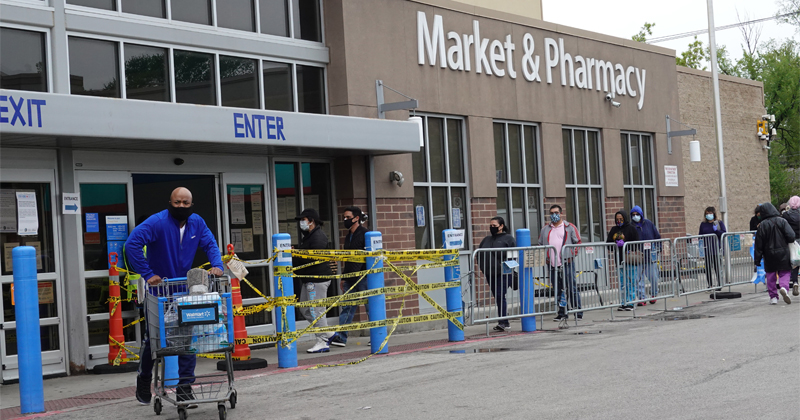 Following in the footsteps of CostCo, Best Buy and Starbucks, moments ago Walmart – the world’s largest retailer – became the latest national chain to require all customers to wear masks.

“As the number of confirmed cases has spiked in communities across the country recently, so too have the number and types of face covering mandates being implemented,” Walmart said in a news release Wednesday. About 65% of its more than 5,000 stores, including its Sam’s Club locations, are located in areas where there is government mandate on face coverings.

“To help bring consistency across stores and clubs, we will require all shoppers to wear a face covering starting Monday, July 20. This will give us time to inform customers and members of the changes, post signage and train associates on the new protocols.”

The change will be enforced on July 20, and comes even as there is federal mandate to wear a mask exists, however the Centers for Disease Control and Prevention says everyone “should wear a cloth face cover when they have to go out in public” adding that “face coverings are meant to protect other people.”

Most major retailers and grocers initially hesitated to enact their own mask mandates for customers during the pandemic, partly over fears of antagonizing shoppers who refuse to wear them, they have also been reluctant to put their employees in the position of enforcing mask requirements.

But sentiment has changed in recent weeks as more than 3.3 million people have now tested positive for the coronavirus nationwide. Cases are climbing in much of the country and many cities and states are reimposing restrictions to contain new outbreaks, including mask requirements in public settings.

Industry groups and unions have also stepped up their calls around mask requirements for customers. Last week, the Retail Leaders Industry Association, an industry trade group, called on the nation’s governors to pass statewide mandates requiring citizens to wear masks in public. The United Food and Commercial Workers’ Union also urged government officials and business leaders to require masks for customers in an advertisement over the weekend.

Walmart’s requirement will likely result in more scenes such as this one:

Owen exposes the hypocrisy of the radical left as cops continue to save lives across the nation.