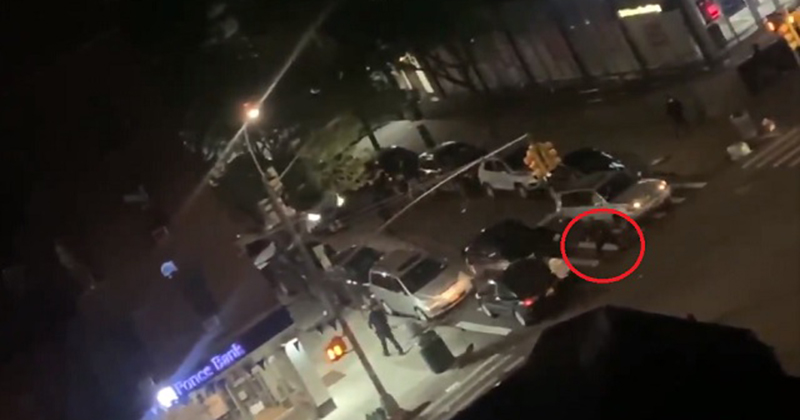 A second ramming attack against police officers in New York was filmed on Monday night, this time in the Bronx.

Footage of the attack was shared on Twitter (WARNING: GRAPHIC):

I had to trim the video but broooo nights got into the pawn shop n then bruh this is fucking wild pic.twitter.com/mAj02ttIFD

Helicopters are everywhere chasing that car down.

Another car attack was filmed just hours earlier in Buffalo:

Just happened: a protest in a car run over a group of cops in Buffalo NY…Some of them might be dead


The Sergeants Benevolent Association shared video of an officer trying to arrest someone being pummeled in the street and attacked by rioters as onlookers filmed and cheered while shouting, “f**k 12,” meaning “f**k the police.”

NYPD Cop attacked in the Bronx. I guess the critics will now say he overreacted. NYPD Cops defend yourselves, you are alone! pic.twitter.com/424w5bZbC6


The Bronx on Monday night was said to resemble a “war zone.”

HAPPENING NOW: Bronx is like a War Zone pic.twitter.com/88X9swMtB6

WATCH: this officer looks watches as protestors #loot right in front of him #bronx #NYCPROTEST #georgefloyd

Van pulls up and gives the purge speech on burnside pic.twitter.com/yk58ROVpqw

Niggas stole the police radio in the Bronx 😂😂😂 pic.twitter.com/cNFadmxE7M

I LOVE THE BRONX😂 pic.twitter.com/A9Viv798Hb

YOU SHOULD NOT BE LOOTING IN THE BRONX, ESPECIALLY SOME PLACE LIKE FORDHAM. WE ARE A COMMUNITY OF MINORITIES. https://t.co/G6h6nilaWG


UPDATE: It turns out three ramming attacks happened in New York the past 24 hours. This incident happened Monday morning in Greenwich Village in New York City. The footage was released Monday night.

Looters were filmed running over a cop with an SUV in Greenwich Village, New York on early Monday.

This is the THIRD ramming attack caught on tape in NY on Monday. pic.twitter.com/NzOMJxbrkM


“The officer was taken to Bellevue Hospital, where he was listed in stable condition,” the New York Daily News reported.

The attackers fled and have not been arrested.