The most radical extremists in the United States have launched a desperate battle plan against Donald Trump and his supporters in the last days before he takes office.

A group calling itself Refuse Fascism, led by the likes of domestic terrorist Bill Ayers and black Marxist Cornel West, are spearheading the final effort to block Trump’s inauguration and have taken out a full page ad in the New York Times declaring, “NO! In the name of humanity, we refuse to accept a fascist America!”

The ad goes on to lay out the plan of action to stop Trump, utilizing all of the predictable buzzwords and rhetoric necessary to justify acting “together outside normal channels,” and comparing the “Trump regime” to that of Hitler and the rise of Nazi Germany.

“The Trump Regime Must and Can Be Stopped Before It Starts!” reads the hysterical propaganda. “By any definition, Donald Trump is a fascist. He has put together a regime who will carry out this program, and worse.”

“Our anger must now become massive resistance—before Donald Trump is inaugurated and has the full reins of power in his hands. Should we fail to rise with determination and daring in our millions now to stop this, the consequences for humanity will be disastrous.” 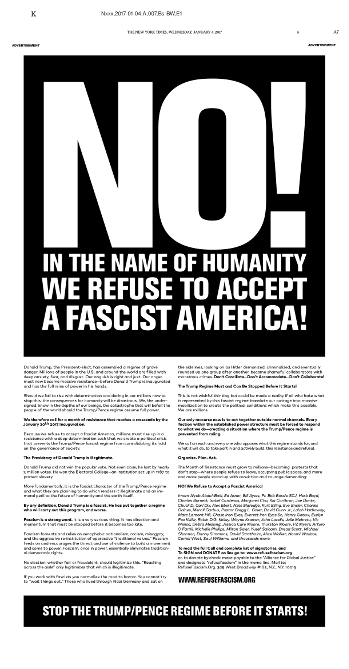 Included in their plans is the goal to “fill the D.C. streets with millions,” beginning with the arrival of protestors during Martin Luther King weekend, January 14-16, to oppose “the white supremacist, American chauvinist, religiously bigoted character of this fascist movement and regime which draw forward everything thus far built and build further.”

In the week leading up to presidential inauguration, they are calling for “millions more [to] demonstrate in every major city and small town all over US and the world, demanding that Trump-Pence be prevented from taking office before January 20.”

While Americans may be more weary than wary of roving bands of “liberal celebrities” throwing tantrums over Donald Trump, no gang with Bill Ayers as a ringleader should be dismissed as irrelevant.

Ayers is a radical communist and former leader of the domestic terrorism organization, the Weather Underground, who were infiltrated by FBI informant, Larry Grathwohl, in the 1970s.

The Weathermen were largely university-educated intellectuals with high degrees and social status.

They realized their barbaric approach of bombing government buildings and murdering police officers was not going to be effective enough, so they formulated a new game plan, assimilating themselves into the education system and political positions as a means of subversion from inside the system.

Ayers once summarized the philosophy of the Weather Underground thusly: “Kill all the rich people. Break up their cars and apartments. Bring the revolution home, Kill your parents.”

He and his co-conspiring terrorist wife, Bernardine Dohrn, became professors at the University of Illinois and Northwestern University School of Law, respectively.

This is after they were on the FBI’s ‘Wanted’ list, and before they helped launch the political career of Barack Obama.

The cast and crew of Refuse Fascism reads like a 21st Century reincarnation of the Weather Underground, and given the onslaught of threats against the life of Donald Trump and his supporters, acute scrutiny should be focused on this extremist group and all heads should be on a swivel in Washington D.C. from now on.