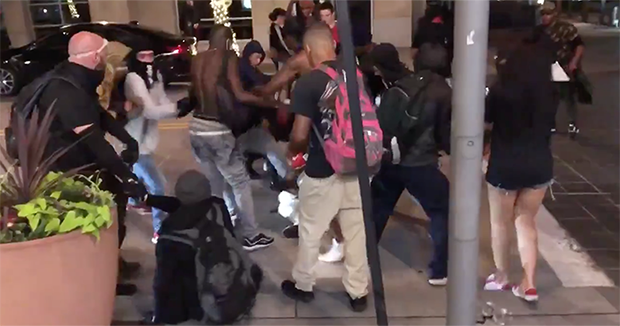 A video of the George Floyd protest in Dallas appears to show a man being beaten nearly to death by the crowd.

The victim reportedly tried to defend his shop with a large sword, a report states.

A video posted by Blaze TV’s Elijah Schaffer shows a man being beaten by a mob after he reportedly attempted to “defend a shop with a large sword.” Shaffer reported the rioters turned on the man and beat him with a skateboard and stoned him with rocks.

Looters ran at him, then he charged rioters

I called an Ambulance and it’s on the way pic.twitter.com/kFxl3kjsBC

The article claims the man was critically injured. The reporter said he called an ambulance for the victim.

None of us are spectators; we are all men and women in the arena. And this fight isn’t just for America, but for the world! Share this link as we plunge into the headlines from this historic time to be alive. Make no mistake, you are living in history. It’s the best of times and the worst of times.

The victim can be seen being assaulted by multiple attackers. Toward the end of the attack, one man appears to kick the victim in the head and then runs away.

The carnage is evident as the crowd disperses and the victim is revealed lying apparently unconscious in an unnatural position face down in the street.

A later post by the reporter shows the “critically injured” man being tended to by emergency medical workers.

Here is the critically injured man being tender to by volunteer medics pic.twitter.com/Jxahufu66B