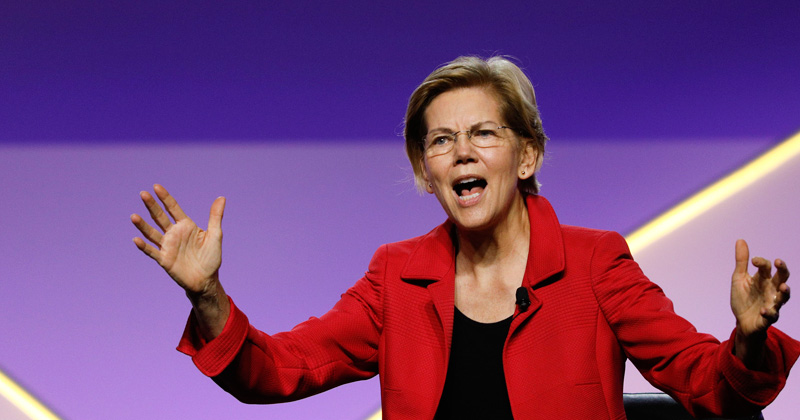 Presidential hopeful Elizabeth Warren bragged about how a broke college girl with only $6.00 in her bank account donated $3.00 of it to her dying campaign.

In addition, Warren whose net worth is an estimated $12 million, bragged about her “selfie line” at a campaign stop.

“A young woman came up by herself and she said, ‘I’m a broke college student with a lot of student loan debt,’ and she said ‘I checked and I have six dollars in the bank. So I just gave three dollars to keep you in the fight.'”

Elizabeth Warren, who has a net worth of $12 million, talking about how a college girl with $6 in her bank account donated $3 to her campaign

Nothing better than rich people telling poor people that the only way to combat poverty is to give all of your money to rich people pic.twitter.com/ZJJDi5zWyL

This is actually a microcosm of Warren’s political ideology: she gets richer and more powerful at the expense of the poor who get poorer.

It also aligns quite well with her “free money” campaign pledges which treat people who are in debt and can’t stop spending money as mere victims who need government welfare instead of encouraging them to take financial self-responsibility.

And the fact that she’s bragging about a broke, in-debt college student giving to her campaign, despite the poor optics, shows why her presidential campaign is dying.

If the story is true – and it might not be considering the lack of enthusiasm for Warren, not to mention her complex web of lies – it isn’t exactly a noble story of sacrifice as Warren isn’t a charity.

Although, maybe her collapsing campaign could be seen as a charity case, given her horrible caucus performance in New Hampshire, a state she should have been highly competitive in since it borders her home state of Massachusetts.

As we reported on Monday, New Hampshire diners brushed off Warren who tried to visit with them during a campaign stop at a restaurant.

The Washington Examiner even declared that she doesn’t have a clear path to the Democratic nomination:

“Warren suggested on Tuesday night that Iowa’s and New Hampshire’s results are only one small part of a much bigger picture. ‘We’re two states in, with 55 states and territories to go. We still have 98% of the delegates for our nomination up for grabs, and Americans in every part of our country are going to make their voices heard,’ she said after congratulating Sanders, Buttigieg, and Klobuchar.”

“This might be true, but Warren is not in a position to compete seriously for the other 98%.”