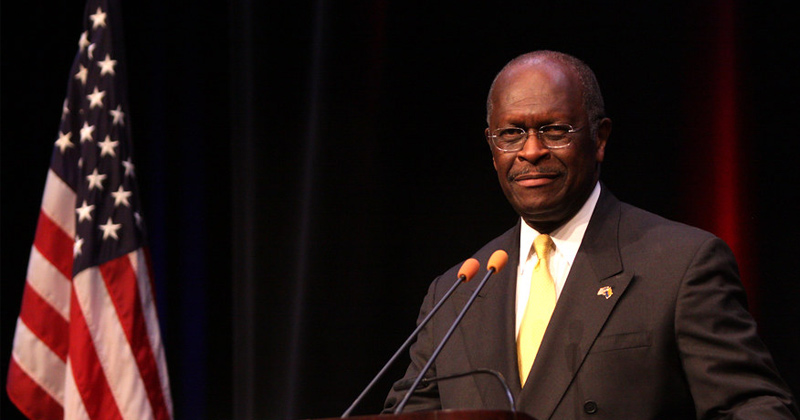 GOP firebrand Herman Cain died on Thursday, with his death attributed to ‘Covid-19,’ but the news prompted some to question if a ventilator – or simply too much oxygen – played a role in his death.

The use of ventilators for treating Covid-19 became controversial after a study revealed that nearly 90% of patients placed on ventilators in New York had died.

A ventilator is a bedside machine that mechanically pumps oxygen into a patient’s body.

Interestingly, on Monday, Cain’s staff stopped short of saying he was on a ventilator, but they did say he was “still in the hospital being treated with oxygen for his lungs.”

We know it’s been a few days since we last gave you an update on the boss. But he is still in the hospital being treated with oxygen for his lungs. In the meantime, the doctors say his other organs and systems are strong.

Keep in mind, Cain was apparently in the hospital for nearly a month being treated for his “oxygen levels,” which prompted some to suggest he was on a ventilator and not a simple oxygen mask.

You don’t spend nearly a month in the hospital–especially in a city that is at or near 100% capacity on ICU beds, as is the case in Atlanta–if all you need is oxygen.

Average hospital stay for COVID-19 is 10-13 days. he’s been there almost 30. Since the tweet ruled out organ problems, he’s almost certainly on a vent. He’s not been there for 25+ days just getting O2 through a mask.

Herman asked us to let you know again how much he appreciates all your prayers. He’s still in an Atlanta-area hospital, where doctors are trying to make sure his oxygen levels are right.

And this tweet is from a few days before:

Good morning! @RobertLaurie here with good news. We just received a message from HC. His oxygen levels are improving, he’s had no complications from the meds, & he’s in no pain.

We’re grateful to God and for your prayers. Keep them coming! We’re confident Herman will back soon!

A study showed that nearly 90% of patients placed on ventilators died in New York’s health system, according to the Washington Examiner.

“The results of a study from the Journal of the American Medical Association released Wednesday showed most hospital patients with the coronavirus died in Northwell Health after being placed on a ventilator,” the outlet reported. “The report examined health records of 5,700 patients with the novel coronavirus hospitalized, and 2,634 of those have either recovered enough to be discharged or have died.”

“Twelve percent of these 2,634 patients were placed on a ventilator, a device that forces air into the lungs of patients who cannot independently breath, and 88.1% died.”

Also, the biotech news outlet STAT reported that some doctors believe ventilators were being overused to treat Covid-19:

In patients who are on ventilators due to non-Covid-19 pneumonia or acute respiratory distress, a blood oxygen level in the 80s can mean impending death, with no room to give noninvasive breathing support more time to work. Physicians are using their experience with ventilators in those situations to guide their care for Covid-19 patients. The problem, critical care physician Cameron Kyle-Sidell told Medscape this week, is that because U.S. physicians had never seen Covid-19 before February, they are basing clinical decisions on conditions that may not be good guides.

In other words, because Covid-19 hadn’t been encountered in the US previously, it’s hard to judge how to treat the virus by using a patient’s oxygen levels:

What’s driving this reassessment is a baffling observation about Covid-19: Many patients have blood oxygen levels so low they should be dead. But they’re not gasping for air, their hearts aren’t racing, and their brains show no signs of blinking off from lack of oxygen.

That is making critical care physicians suspect that blood levels of oxygen, which for decades have driven decisions about breathing support for patients with pneumonia and acute respiratory distress, might be misleading them about how to care for those with Covid-19. In particular, more and more are concerned about the use of intubation and mechanical ventilators.

Cain was a cancer survivor after having one-third of his colon and 70% of his liver removed.