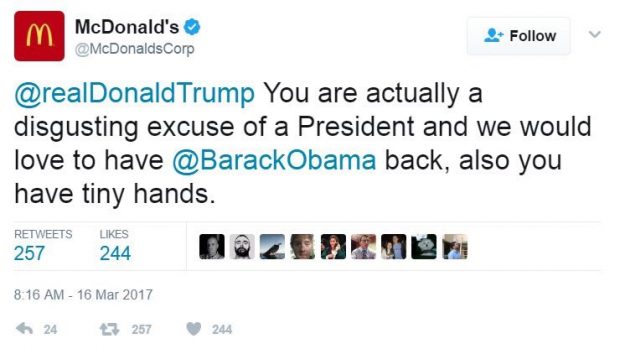 “Prior to that he held several senior advisory roles in the White House, serving as President Barack Obama’s press secretary during his first term, then as senior campaign advisor during his re-election campaign,” McDonald’s announced in 2015. “…In his new role, Gibbs will lead McDonald’s corporate relations group, which manages internal and external communications and government and public affairs.”

“He will lead McDonald’s in communicating clear, coordinated messages to internal and external constituencies, enhancing the brand and supporting corporate strategies.”

As press secretary, Gibbs was a known liar who admittedly, under orders, mislead the public about the Obama administration’s drone program.

“Here’s what’s inherently crazy about that proposition: you’re being asked a question based on reporting of a program that exists,” he said. “So you’re the official government spokesperson acting as if the entire program… pay no attention to the man behind the curtain.”

Of course, Gibbs may have had nothing to do with the tweet, which called Trump a “disgusting excuse of a president” with “tiny hands,” but he got caught up in Internet speculation due to the fact that numerous Obama insiders still in positions of power have tried to undermine Trump.

It was just last month that a former Obama administration official suggested that President Trump be either declared mentally unfit to hold office or overthrown in a military coup.

Journalist Ed Klein warned that Obama decided to stay in DC after his presidency to run a “shadow government” against Trump with help from his former colleagues.

“For the past 100 years every president who is outgoing has packed up his stuff, gone home and not criticized his successor. This is not what the Obamas are planning to do,” Klein said on Fox & Friends in Dec. “They rented an eight-bedroom mansion in the Kalorama section of Washington from Joe Lockhart, who is Bill Clinton’s last press secretary.”

“In that house there’s enough room for Valerie Jarrett as well as Michelle and the kids. A place for ten cars to park. They are setting up what they are calling a shadow government.”