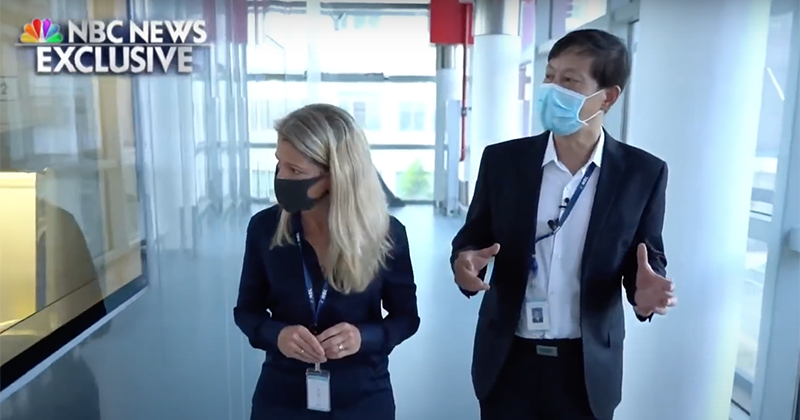 A Washington Post columnist has eviscerated an NBC “investigative” report on the Wuhan Institute of Virology, that did nothing but provide a platform for scientists there to complain they were being made scapegoats over the coronavirus pandemic.

Josh Rogin noted that NBC’s powder puff coverage contained basic factual errors and even mistruths from the scientists interviewed, that received zero pushback from the network.

Rogin continued his analysis, noting that NBC inadvertently revealed that Wang Yanyi, director of the WIV, was bending the truth beyond recognition:

“Yanyi told NBC reporters the U.S. officials visited in March 2018, two months after the first cable was written. The truth is they visited three times, both before and after the Jan. 2018 cable. Did U.S. officials make an entire visit? Not likely,” Rogin wrote.

The columnist also called out the network for suggesting it couldn’t find any evidence that the coronavirus could have originated there.

“The NBC reporters toured the lab, as if that would tell them anything. What did they expect to find, a piece of paper they forgot to throw out that says “Coronavirus Origin Evidence”? It’s absurd to think that has any probative value.” Rogin urged.

He also noted that NBC falsely suggested that Dr Fauci “discounted the idea that the virus had accidentally escaped from a lab,” and that comments made by disease ecology expert Peter Daszak are questionable given he has a direct conflict of interest, and appears to be warping logic:

The NBC piece also launders more warped logic by Peter Daszak, who has a direct conflict of interest. "The fact that they published the sequence so quickly suggests to me that they weren't trying to cover up anything." Or, maybe they were so quick because they recognized it.

“U.S. news organizations must do better than presenting a walk around a lab and an interview with falsehoods in it as telling us anything about the virus.” Rogin asserted.

He also explained why properly investigating the lab matters:

The actual origin story is critically important scientifically to understanding how the outbreak started and therefore how to fight it and how to prevent the next one. Should we spend our time shutting down wet markets or stopping risky bat research? Get it?

When even the Washington Post calls out fake news, you know it must be bad!