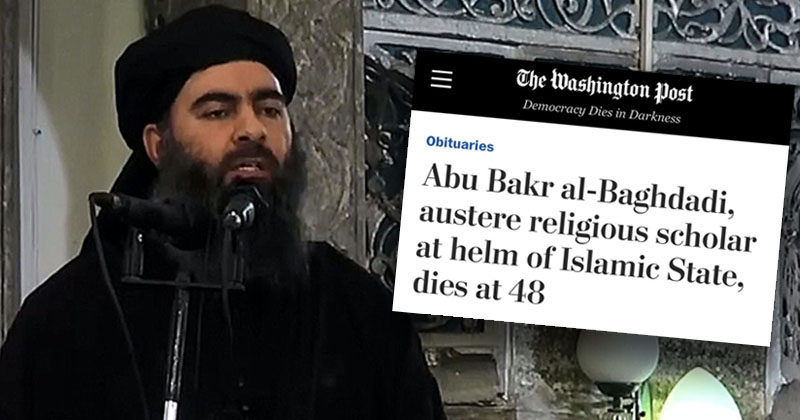 The Washington Post referred to ISIS founder Abu Bakr al-Baghdadi as an “austere religious scholar” in its Sunday obituary for the murderous jihadist.

He beheaded thousands of innocent people, raped and murdered little girls, and the @washingtonpost calls him an “austere religious scholar.” pic.twitter.com/mJdq5Of4Yl

Embarrassing and outright propaganda. No longer a question as to their utter contempt for America as they continue their LEAKS, LIES and fake news

You have got to be kidding me.

“Acquaintances would remember him as a shy, nearsighted youth who liked soccer but preferred to spend his free time at the local mosque” pic.twitter.com/XFFBnUsHEO

Adolf Hitler, struggling artist at the helm of the German Nationalism movement, dies at 56.#BagdadiEulogies pic.twitter.com/KX3V5Nj2hu

No word yet from @AOC or @IlhanMN on the death of al-Baghdadi.

The Washington Post @washingtonpost makes me sick! Religious scholar? He was a brutal mass murdering wanted terrorist. The anti-American, leftist, and socialist mainstream media is just as much a threat to our country today as was al-Baghdadi! America needs to wake up! pic.twitter.com/oRF2EmulRT

That cannot be real. Right?

This is an absolute disgrace.

Following condemnation on social media, the leftist newspaper quickly changed the headline to “Extremist leader of Islamic State dies at 48.”

Unbelievably, WaPo notes that al-Baghdadi “dies,” as if by natural causes.

The ISIS leader reportedly blew up himself, two wives, and several children with a suicide vest during a spec ops raid conducted by U.S. forces outside of the Idlib province of Syria.

WaPo’s latest journalistic bungle is just par for the course for the mainstream media.

Bill Warner, Ph.D., is a respected expert on political Islam. As an international speaker, author, and video blogger, Warner analyzes Islamic doctrine using scientific methods and evaluations from the Islamic Trilogy of the Koran, the Sira, Mohammed’s biography and the Hadith, the traditions of Mohammed. Warner founded the Center for the Study of Political Islam.