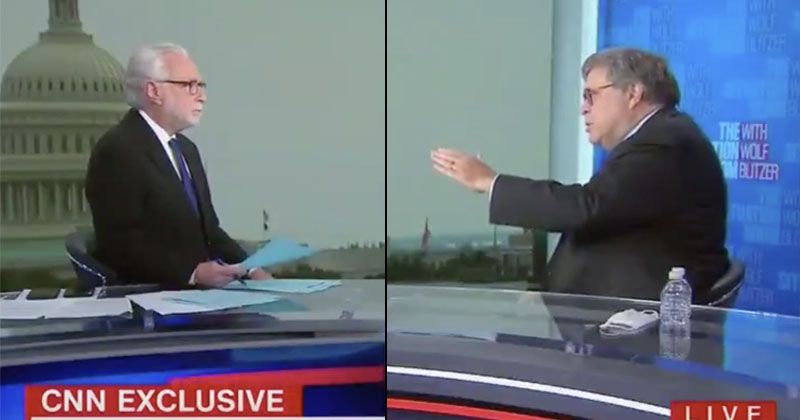 During a tense exchange with the CNN host on Wednesday, Barr pushed back against the media’s constant gaslighting against the American people, including its claims that mail-in voting is secure and necessary this election.

“The media should be fair and balanced no matter who the president is,” Barr said, adding that the media’s hatred of Trump “doesn’t give the media a license to lie the way a lot of the media is.”

AG Bill Barr to CNN's Wolf Blitzer: "The media should be fair and balanced no matter who the president is. Doesn't give the media a license to lie the way a lot of the media is."

Blitzer: "I can speak for us, we are fair and balanced."

Earlier in the interview, Barr snapped at Blitzer for asking him to interpret one of Trump’s tweets about mail-in voting when he clearly had his own interpretation of the tweet.

“Wolf, this is cheap talk to get around the fundamental problem,” Barr said. “Which is the bipartisan commission by Jimmy Carter and James Baker said back in 2009 that mail-in voting was fraught with the risk of fraud and coercion.”

“And until this administration –” he continued until Blizter tried to interrupt.

“Let me talk!” Barr barked. “Since that time, there have been in the newspapers, and networks, academic studies, saying it is open to fraud and coercion. The only time the narrative changed is after this administration came in, but elections that have been held with mail have found substantial fraud and coercion.”

Barr went on to explain the dangers behind implementing mass mail-in voting during a time when Americans have little confidence in the political system due to the divided cultural environment.

“We haven’t had the kind of widespread use of mail-in ballots as being proposed,” he continued. “We’ve had absentee ballots requested from people with a specific address. Now what we’re talking about is mailing them to everyone on the voter list when everyone already knows that those lists are inaccurate.”

Holy Crap Honey Badger is pissed off and is eating the old Wolf as a snack! Dammmmn! pic.twitter.com/bnr4mjeVJb

“People who should get them don’t get them, which has been one of the major complaints in states who have tried this in municipal elections. And people who get them are not the right people, they’re people who replaced the previous occupant and can make them out. There’s sometimes multiple ballots come to the same address with several generations of occupants.”

“You think that’s a way to run a vote? This is playing with fire,” Barr added.

Alex Jones exposes the propaganda to sell the American people to accept the impending Landslide victory for Trump, and the mail-in ballot fraud that will follow as the Dems attempt to steal the election.