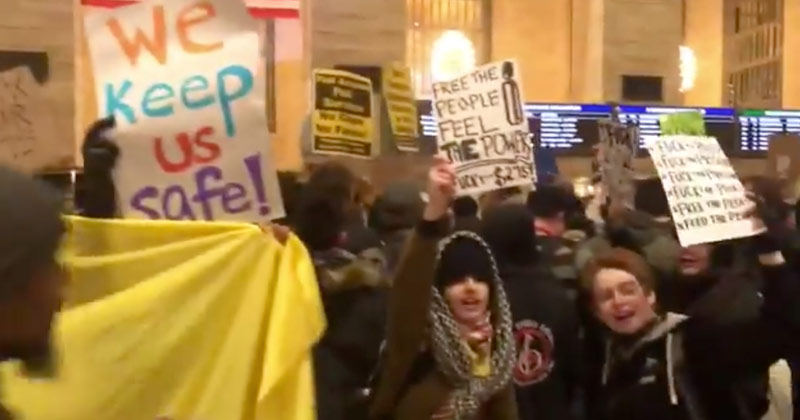 An anti-police group in New York City called on activists to destroy Metropolitan Transportation Authority property across the city on January 31, in a bid for free public transportation.

On Tuesday, a group known as Decolonize This Place posted a video calling on activists to “link up” and “fuck shit up” on “J31.”

The streets are ours. The trains our ours. The walls are ours. This moment is ours. How will you and your crew build and fuck shit up for #FTP3 on #J31 (THIS FRIDAY)? Issa mothafuckin' movement. pic.twitter.com/CoEjRSvmDX

“We encourage you to link up with your friends, your family, and think of the ways you can move in affinity to build and fuck shit up on J31 all day long,” an anonymous activist says in the video. “The mood for J31 is simple: Fuck your $2.75. No cops in the MTA, free transit, no harassment period, and full accessibility. We hope that you come through and move with us on J31. Fuck the police.”

On Friday, the group’s Twitter feed was loaded with posts of activists who’d taken “action” against the transit authority by protesting, chaining open subway gates and tagging subway stations with graffiti.

Remember: we’re on unceded Lenni-Lenape land. @decolonize_this sticker was placed where it was for a reason, but ALL this land was stolen from her original people. It’s time to restore whatever we can. #ftp for the people & the planet. #farestrike #J31 #FTP3 #decolonizethisplace pic.twitter.com/0dD9vA8UXi

#J31 ALL DAY SPOTTED IN THE BX pic.twitter.com/zeknqmGi7P

Video of the action👇🏽 pic.twitter.com/9oPByCgnaY

Someone used a bike lock on an exit door to prevent it from closing. Respect to comrade u-lock for supporting today’s fare strike as part of J31. Cops out of the subways and free public transportation! Follow @decolonize_this for updates today, and be at Grand Central at 5pm. pic.twitter.com/qQ1Wli5MPO

Protesters later assembled at Grand Central station before heading out to Brooklyn.

NYPD appeared ready to mobilize against demonstrators who broke any laws, according to an internal memo.

While we will always protect people’s right to protest, illegal conduct that puts law-abiding community and cops in danger will not be tolerated in New York City. It is imperative that officers take appropriate action and make arrests when they observe a violation of the law.

A statement from NYPD chief Terrence Monahan also indicated police would be arresting activists who they catch vandalizing subways or attacking police.

“This morning, a group of individuals vandalized subway stations. We believe the same individuals will attempt to disrupt the evening commute by causing disorder, endangering commuters – and even attempting to physically assault our officers. IT WILL NOT BE TOLERATED,” Monahan stated.

This morning, a group of individuals vandalized subway stations. We believe the same individuals will attempt to disrupt the evening commute in the subway by causing disorder, endangering commuters – and even attempting to physically assault our officers.
IT WILL NOT BE TOLERATED pic.twitter.com/okeinSuMuN

“While the NYPD will always protect people’s right to protest, we will not accept illegal behavior that threatens the safety of others. Those who break the law will be arrested.”

Listen to this arrested Antifa whine to the police that his dad works for the court. Absolutely perfect pic.twitter.com/PcwS5SfJhr

VIDEO: NYPD chase down and bust Antifa rioter running away at #FTP3 pic.twitter.com/XKBqlgcHuF

Protesters appear to be attacking police now in NYC pic.twitter.com/6v4anpw3lZ

This is a developing story…