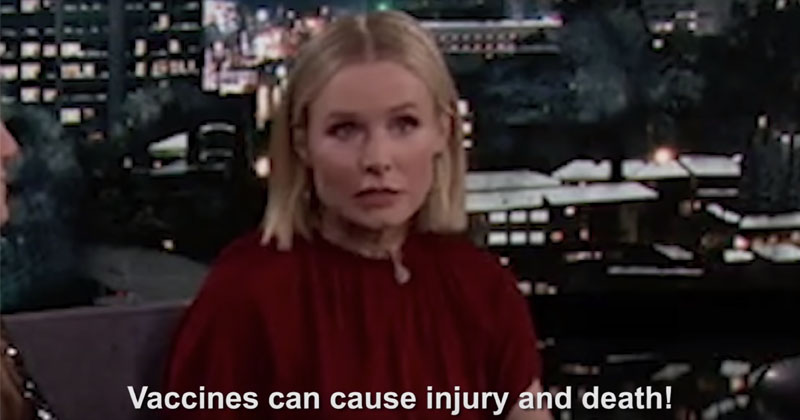 Protesters from the organization V is for Vaccine infiltrated a taping of Jimmy Kimmel LIVE to interrupt his interview with pro-vaccine actress Kristen Bell.

Bell was on the set Thursday to promote her new movie “Frozen 2” when several protesters among the audience shouted, “Vaccines can causes injury and death! Stop discriminating against vaccine-injured children, Kristen! Let’s have a discussion.”

Audio recording of the encounter then shows Kimmel suggesting they talk some other time before the sounds of scuffling begin, presumably from the bodyguards attempting to eject them from the studio.

“We wanted to say our piece and get the eff out,” one of the protesters said on camera afterwards. “We were like, we’re not even gonna be shamed and let them escort us, so we just said it and then we bailed.”

Another protester described the bodyguards as manhandling them while telling them they were under arrest.

“And then there was four guys chasing us, f***, ‘don’t let em out, don’t let em out!'” she said, adding they tried to pass themselves off as law enforcement while grabbing them to escort them out of the building.

Bell is staunchly pro-vaccine, having shared her views on social media and husband Dax Shepard describing them as the “most vocal pro-vaccination couple in the biz.”

California mandated MMR vaccines to attend school, then New York. Now NY State legislators are introducing a bill to mandate HPV vaccines for girls AND boys from age 9 up as a condition of admission to day care or govt schools.