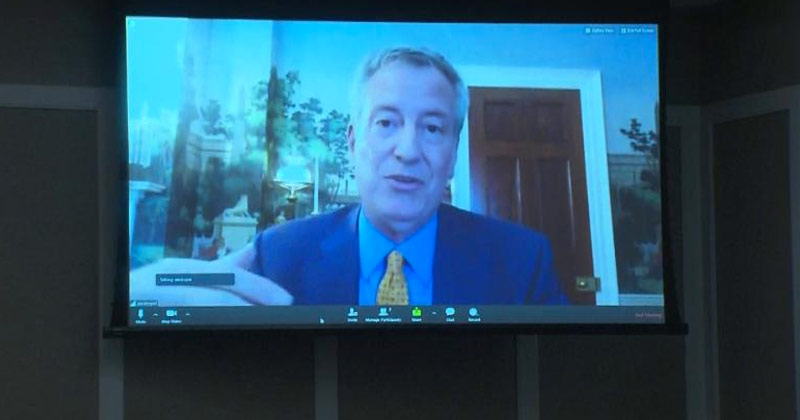 Democrats eager to hear from Bill De Blasio were instead treated to a high-pitched version of the New York mayor after audio issues interfered with a speech delivered to an Iowa labor union.

De Blasio was unable to attend an Iowa AFL-CIO labor union speaking engagement Wednesday, so he attempted to Skype in.

Unfortunately, technical audio issues marred his speech and distracted everyone from listening to what he had to say.

One reporter with the Washington Post jested De Blasio “sounded like he’d gulped a canister of helium.”

“So that was a little bit different,” the announcer says at the conclusion of Bill DeBlasio’s remarks, in which, due to some apparent audio difficulties, he sounded like he’d gulped a canister of helium. pic.twitter.com/WbZAcRCGfo

Another WaPo writer described the issue as “hilarious and unfortunate,” while Barstool News mocked the candidate’s voice as being “higher than his poll numbers.”

De Blasio is appearing via a video feed that, hilariously and unfortunately, is distorting his voice by making it sound higher. pic.twitter.com/ae1zRYxXOZ

The Mayor’s voice is higher than his poll numbers https://t.co/7UIzaHKmck

With De Blasio failing to meet the necessary requirements to appear on stage during next month’s third round of debates, his latest gaffe suggests it’s only a matter of time before his campaign goes the way of Eric Swalwell and Jay Inslee.