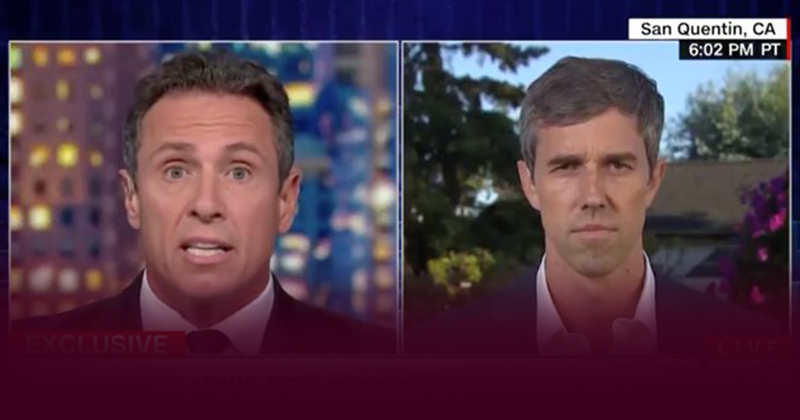 Beto O’Rourke admits that if he ever became President he would force Americans to give up their firearms. But he also claims that anyone suggesting the government is going to do such a thing is ‘fearmongering’.

It was left to CNN’s Chris ‘Fredo’ Cuomo, of all people, to explain to Beto that he is a walking contradiction.

CNN's Cuomo: "Are you in fact in favor of gun confiscation?"

Beto: "Yes … I don't want you, or anyone else to get into the fear-mongering … that the gov is going come and take your guns"

Cuomo: "It's not about fear-mongering. You just said it, Beto" pic.twitter.com/GshnjrSpHl

“It’s not about fear-mongering. You just said it, Beto” Cuomo noted, adding “I don’t think you can do it, legally. The Heller case makes it pretty clear that there’s an individual right to own, and I don’ t think we’ve ever seen the US government do a taking of private property, like what you’re suggesting.”

“So I’m not fearmongering, I’m repeating what you are saying.” Cuomo added.

Beto had basically no come back and resorted to arguing that schools are going to be shot up by Americans wielding AR15’s and AK47s if the government doesn’t take them away.

It’s looking pretty bad for Beto. He just lost a debate with Fredo.

Silicon Valley is now throwing its weight behind demonizing all gun owners as violent radicals. Once the Commie-style social credit score is fully in place, photos like this will lead to real world punishments, like your bank account being taken away.

In a related development, the anti-Second Amendment group March for Our Lives celebrated Thursday, after firearm manufacturer Colt announced it is ending production of AR-15s for the public.

You all. The firearm manufacturer, Colt is ending production of AR-15s due to lack of demand. This is real life. We’re winning. https://t.co/iB19k1VUR4

The group declared that they are “winning.”

Except, this actually has nothing to do with them at all, and they’re not winning anything, because, as noted by Colt itself, and in practically every report about the move, the company cannot compete with the plethora of other manufacturers producing the firearms at a lower price, and instead is going to concentrate on more lucrative military and law enforcement contracts.

“Our warfighters and law enforcement personnel continue to demand Colt rifles and we are fortunate enough to have been awarded significant military and law enforcement contracts. Currently, these high-volume contracts are absorbing all of Colt’s manufacturing capacity for rifles,”Colt President and CEO Dennis Veilleux said.

The move has absolutely zero to do with the actions of March for Our Lives, with the AR15 still in mass production, and still the most popular rifle in the country.

That is until hell freezes over and President Beto is sworn in.