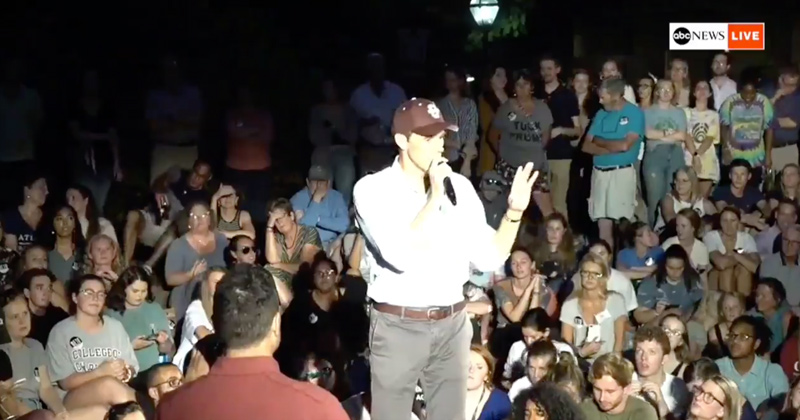 “Beto” O’Rourke re-asserted his support for third trimester abortions Monday, telling a man that his mother had the right to abort him up to one day before he was born.

Appearing at a South Carolina college, O’Rourke was asked if he still stood by his previously vocal support for late-term abortions.

Beto tells pro-life man "of course I don't think that [your life had no value]," before arguing the man's mother had a right to abort him the day before he was born for no other reason than she wanted to

“I saw in March, on Twitter, video — you were at a town hall meeting just like this in Cleveland,” the man told O’Rourke. “And someone asked you specifically, specifically about third trimester abortions, and you said that’s a decision left up to the mother. So, my question is this: I was born September 8th, 1989, and I want to know if you think on September 7th, 1989, my life had no value.”

O’Rourke responded, “Of course I don’t think that. And of course I’m glad that you’re here,” before adding that it was his mother’s decision to terminate the pregnancy a day before his birth.

“But you referenced my answer in Ohio, and it remains the same,” Beto answered. This is a decision that neither you, nor I, nor the United States government should be making. That’s a decision for the woman to make. We want her to have the best possible access to care and to a medical provider, and I’ll tell you the consequence of this, this attack on a woman’s right to choose —”

The man followed up Beto’s answer wanting to know, “But what about my right to life?”

Beto again answered by defending Roe V. Wade, saying, “I listened to you, and I heard your question. I’m answering it,” O’Rourke said. “And the attack on Roe v. Wade, which we thought was the settled law of the land, and lest we had any illusion that the achievements that we’ve made are protected forever, or that progress is inevitable, that has been shattered right now.”

Beto relied on the same diversionary tactic when he spoke to Infowars’ Millie Weaver, deflecting to women’s rights when asked if he supported late-term abortions.