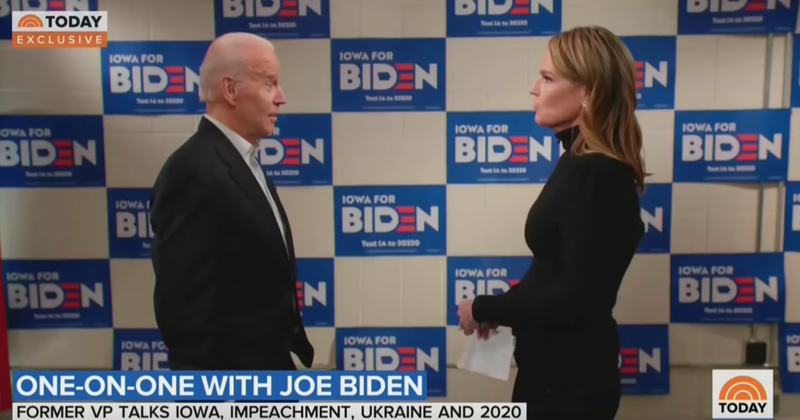 Guthrie struck a nerve when she mentioned the irony behind Trump wanting to expose Biden corruption in Ukraine, and impeachment proceedings making his son Hunter’s Ukraine dealings public.

After agreeing his son’s work for Ukraine gas firm Burisma Holdings “sets a bad image,” Biden becomes visibly frustrated when the reporter presses on the issue.

“Do you think it was wrong for [Hunter] to take that position knowing that it was really because that company wanted access to you?” Guthrie asked.

“Well, that’s not true. You’re saying things that you don’t know what you’re talking about,” Biden snapped. “No one said that. Who said that?”

Guthrie proceeds to point out how Hunter’s work with Ukraine firm Burisma could be viewed as “sleazy,” especially given Biden’s former position as U.S. vice president.

“Don’t you think that it’s just one of those things where people think that, ‘Well, that seems kind of sleazy. Why would he have that job if not for who his father was?'”

“Because he’s a very bright guy,” Biden insists, adding, “He said he regretted having done it. Speaks for himself. He’s a grown man.”

In fact, during an ABC News interview last year, Hunter himself admitted he likely wouldn’t have been hired by the Ukraine gas firm were it not for his surname.

"What I regret is not taking into account that there would be a Rudy Giuliani and a president…that would be listening to this—this ridiculous conspiracy idea." https://t.co/h6P0pJJhJR pic.twitter.com/FOeiXNkUjs

While the Bidens’ actions were no doubt unseemly, Democrat voters don’t seem to be bothered by the quid pro quo.

Biden is currently the Democrat presidential frontrunner and hopes to retain his position heading into the Iowa caucuses Monday.

What year did he become VP? What country is at the center of the corruption controversy? Don’t ask Joe Biden. He can’t remember. And Bloomberg kowtows & virtue signals to the idols of the radical left.