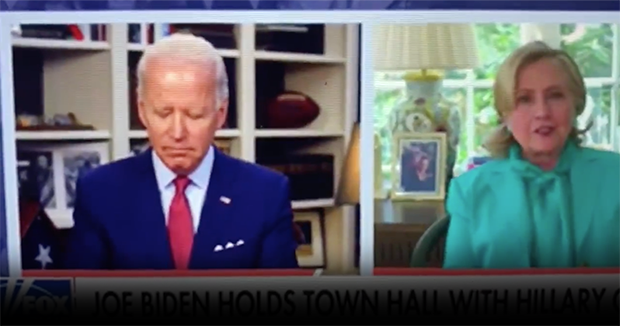 Joe Biden once again struggled to put two words together, conveniently, when he was asked by a reporter about his son’s business dealings with China.

Sleepily talking from his basement, Biden replied that his son’s business dealings in China do not make him vulnerable because They “were not anything what everybody that he’s talking about. Not even remotely.”

What that means is anyone’s guess.

Biden, who was endorsed by Hilary Clinton this week, also declared during the same interview that he intends to reverse President Trump’s decision to pause funding to the World Health Organisation until it’s role with China in downplaying the coronavirus outbreak has been investigated.

During his interview with Hillary, Biden struggled to stay awake.

Joe Biden fell asleep during his town hall with Hillary Clinton. To be fair, everyone else watching was also asleep. pic.twitter.com/S4EIzVjA1I

Another embarrassing moment occurred when someone hit mute on Hillary:

This was the best part, however:

The Joe Biden, Hillary Clinton town hall is off to a great start 😂😂😂 pic.twitter.com/Hhiufm7bXN

.@JoeBiden: What we need is more “economic intercourse” pic.twitter.com/zLa8hqspC0

He also recently gibbered and asked a perplexed Al Gore, “is it too late to aggress climate change?”

Last week, Norwegian psychiatrist Fred Heggen claimed that Biden is suffering from “dementia” and that his condition has worsened “at galloping speed.”

Biden has said he wants to debate Trump from his basement. It should be obvious to anyone that Trump will obliterate this guy in any form of debate.