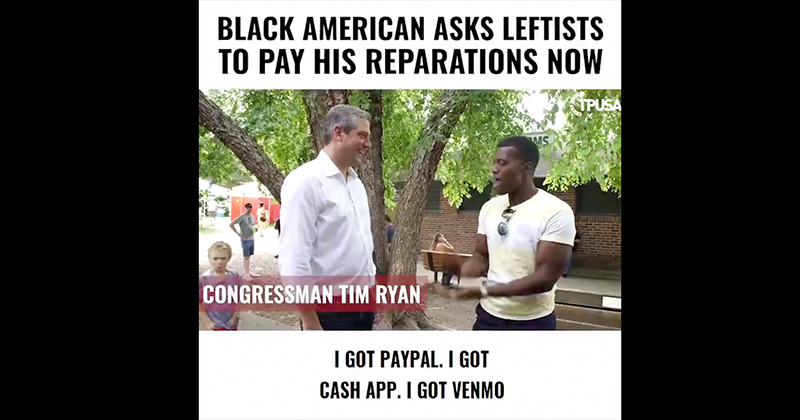 Rob Smith of Turning Point USA confronted 2020 Democrat presidential candidates at the Iowa State Fair on Wednesday to ask if, as a black man, he could be given his reparations right then and there.

Smith, who is an Iraq War veteran, approached Democrat candidates who have previously voiced their support for reparations to see if he could score some cash.

Many running for President support Reparations.

TPUSA’s @robsmithonline decided to test their commitment and ask a very simple question:

‘Can I have my reparations right now?’

If they truly supported reparations, shouldn’t they pay?

“Is there any way that I can have the money now? Like physically,” Smith asked Tim Ryan. “I got Cash App, I got PayPal, I got Venmo, I got all that stuff.”

“No,” Ryan responded with a chuckle.

Cory Booker, Elizabeth Warren and Tulsi Gabbard told Smith to look up the bill pending in the House to learn how he’ll be compensated for slavery.

Andrew Yang said, “I’m working on it,” when Smith asked if he could have his money now.

Julian Castro wouldn’t even grace Smith with a response and instead, awkwardly smirked and walked away.

Apparently, none of the 2020 Democrat candidates are willing to fork out their own dough to show they can practice what they preach.