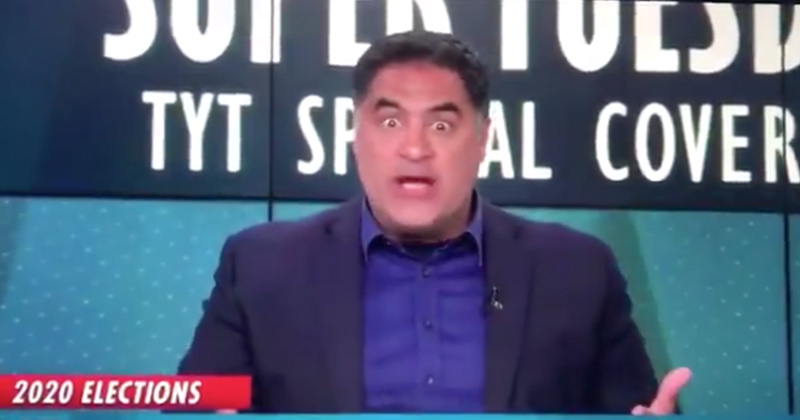 During livestream coverage of the event, Uygur went off the rails blasting Democrats for selecting “establishment candidate” Joe Biden to lead the party against Donald Trump in November.

“We thought it was almost over, Bernie was gonna win. Now it’s not over. Now we’re in a tie,” Uygur said, unable to process Sanders’ defeat.

“And so you wanna go to war? We’ll go to war and that is what this is. We cannot let Biden win,” he said, adding, “Biden’s not going to beat Trump. Biden is either near senile, or actually senile. Watch any of the tapes. And Biden lies nonstop. He’s gonna get caught. Okay, the media is covering for him, but they’re not gonna be able to cover when the republicans come for him or when Trump comes for him. He’s not going to beat Trump.”

Uygur also reminds his audience the establishment candidate lost to Trump in 2016:

“And now here we go an establishment candidate that is far worse, with mental faculties under question, his record worse than Hillary Clinton’s. He lies 1000 times more than Hillary Clinton did right and you’re gonna run that guy against Trump, and we’re gonna lose to trump again and possibly lose our democracy? Hell no. Hell no. No. Bernie Sanders is going to win this race.”

In the broadcast’s livestream chatroom, viewers commented “MELTDOWN” as Uygur appeared ready to burst into tears.

And finally, with red eyes and chants of "MELTDOWN" on the chat, Cenk Uygur abandons his own show.
TYT is left with the B team as Cenk leaves before they talk about his race. Says he will Skype in later and begs for money lol pic.twitter.com/2s9g8BNZgJ

To make matters worse for Cenk, he was roundly defeated in California’s 25th congressional district, where he managed to pull in less than five percent of the vote.

You hate to see it. #CA25 pic.twitter.com/BfdZiSQhR6

I see that sleazy @cenkuygur went down in flames in CA #25. Less than 5% of the vote! I wonder if this not-so-young Turk is going to blame Russian intervention. It’s very hard for people like Cenk to come to grips with the idea that they suck

Cenk (Stink) Uygur, creator & anchor of YouTube’s heavily promoted Young Turds, Google’s choice for 2016 live coverage was endorsed by fellow “progressive” and perv Bernie Sanders until his previous comments about his infatuation with bestiality & his misogyny put a “kink” in Stink’s congressional campaign