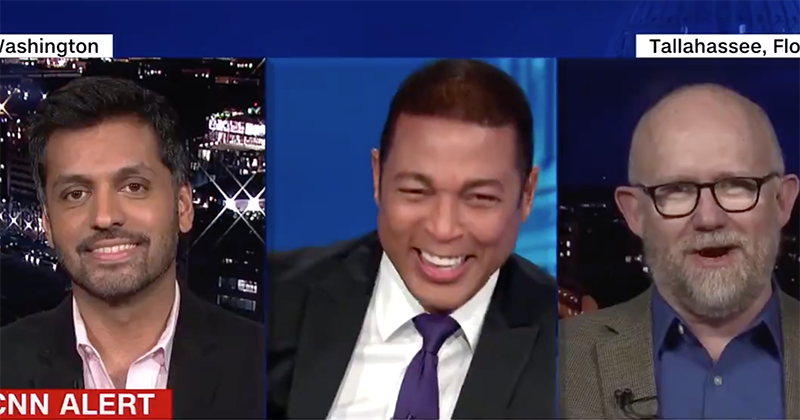 This is CNN. During a discussion regarding the impeachment show trial, Don Lemon and a pair of talking heads devolved into imitating southern accents and declaring that anyone who can read or spell is an elitist, in an effort to mock Trump voters as stupid rednecks.

In an unbridled show of arrogance, Lemon cackled while blowhard Rick Wilson and New York Times op-ed writer Wajahat Ali suggested that anyone who voted for Trump is an illiterate dummy.

Wilson declared that “Donald Trump couldn’t find Ukraine on a map if you had the letter ‘U’ and a picture of an actual, physical crane next to it,” then asserted that Trump is backed only by a “credulous boomer rube demo” of Americans.

“Donald Trump’s the smart one, and there all y’all, y’all elitists are duuuumb.” Wilson shouted in a faux Southern accent.

The arrogance, the dismissiveness, the smug cackling, the accents.

If Donald Trump wins re-election this year, I’ll remember this brief CNN segment late one Saturday night in January as the perfect encapsulation for why it happened. pic.twitter.com/8kQ6zN9AZV

“You elitists, with your geography and your maps and your spellin’.”  Ali joined in, with his own redneck impression.

“Your math and your readin!’” Wilson added, the hilarity in full flow.

“Yeah, your readin’, your geography, knowing other countries, sipping your latte,” said Ali.

“All those liiines on the map,” said Wilson.

“Only them elitists know where Ukraine is,” Ali added.

When Lemon finally composed himself,  he admitted “I needed that.”

Trump himself responded to the clip in typical fashion on Twitter, calling Lemon “the dumbest man on television (with terrible ratings)”.

This display is a prime example of why Trump will win a second term.

Sitting in television studios in Washington and on the East cost, calling Americans stupid and illiterate doesn’t tend to go over too well.

The ultimate irony is that Y’all elitists really are duuuumb.

This isn't disdain or disagreement. What Wajahat, Don, & Rick showed was a disrespect, hatred, & mockery for their fellow man who disagree. I don't want to hear @JakeTapper, @andersoncooper, @BrianStelter, @ChrisCuomo, or anyone on @CNN lecture about their higher level of decency https://t.co/h47wnkcUCF

America, this is what CNN thinks of you…
pic.twitter.com/puuVjRLlw1

Following backlash, Wilson doubled down, calling the response “contrived phony bullshit outrage,” and using the attention to advertise his anti-Trump book titled ‘Running Against the Devil.’

The most beautiful part of this entirely contrived phony bullshit outrage about that segment isn’t that I insulted the Maga demo.

The best part is how they’re repeating the now-classic #UCrane bit and amplifying a line that clearly made @realDonaldTrump furious. pic.twitter.com/rNr1skjYZ1

1/ The fundamental underpinning of the fake outrage is simple.

The MAGA world wants the freedom to attack, insult, demean, and abuse anyone who doesn’t aggressively worship Donald Trump.

They can’t stand anyone who punches back, and hope they can intimidate or shame me.

2/ At the top of the pyramid are the Trump email grifters and Fox News outrage hustlers. They recognize that all that is left inside the Republican Party as an ideology is a hatred of elites and the media.

They hope that they can shield their bad behavior, pathologies, willful ignorance, weaknesses, credulity, nature, and worship of Donald Trump behind a “how dare you talk down to me” anger without response.

Ali also refused to back down:

We did. Not going to apologize for it either. If you're willing to believe and promote these absurd and dangerous lies, well, you deserve to be mocked for it: "CNNs Don Lemon Cracks Up As Rick Wilson, Wajahat Ali Trash Trump Supporters As Ignorant Rubes" https://t.co/gK3s42yj6c

Congratulations guys on contributing to another four years of MAGA in the White House.