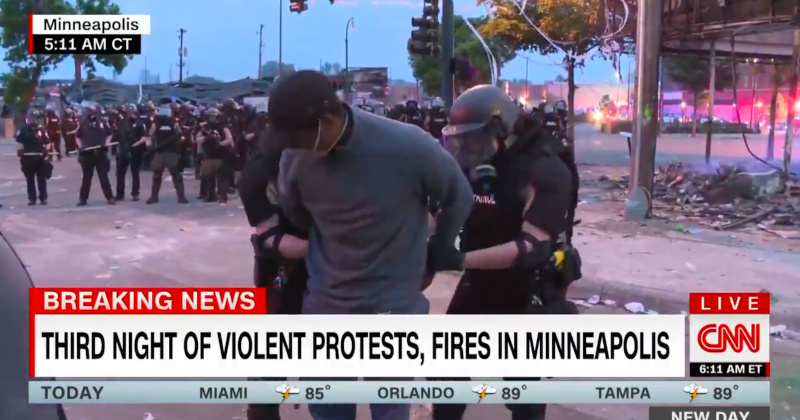 Minnesota State Patrol officers have arrested CNN journalist Omar Jimenez and two crew members during a live broadcast from protests in Minneapolis, which were sparked by George Floyd’s death.

The three men were later released.

Footage posted to social media on Friday morning shows Jimenez identifying himself as a journalist and telling officers: “We can move back to where you’d like. We are live on the air at the moment.”

Jimenez repeatedly signals that he and his crew will move away from the area and go “wherever you want us.” He then continues his report while two officers hold him by the arms and tell him: “You are under arrest.”

“Do you mind telling me why I am under arrest, sir?” Jimenez asks in the video. Another member of the team then reiterates: “We told you before that we are with CNN.”

Footage continues to roll live as Jimenez is hauled away in handcuffs by one officer.

The situation then becomes more intense as the state police officers proceed to arrest the CNN producer and cameraman. “We’re just out here doing our job as well as you are,” one of the men can be heard telling police.

“Our camera is on the ground because our cameraman has now been handcuffed,” one of the studio anchors explains to viewers watching the surreal scene unfold.

“I’ve never seen anything like this,” another anchor adds as a member of the police force carries the camera away, apparently unaware that it is still recording.

A photographer who was not arrested has reportedly communicated to CNN that police explained the other crew members were arrested because they were “told to move and didn’t.”

CNN confirmed Jimenez and his crew were release just before 7AM. In a statement calling for their release, the network said the arrests were a “clear violation of their First Amendment rights.”

Minnesota Governor Tim Walz said he “deeply apologizes” for the “unacceptable” incident in a conversation with CNN president Jeff Zucker, the network said.

The crew were reporting from Minneapolis as riots and protests gripped the city for the third day following Floyd’s death. Floyd, a 47-year-old unarmed black man, died during an arrest after a Minneapolis officer kneeled on his neck and refused to move despite his pleas.