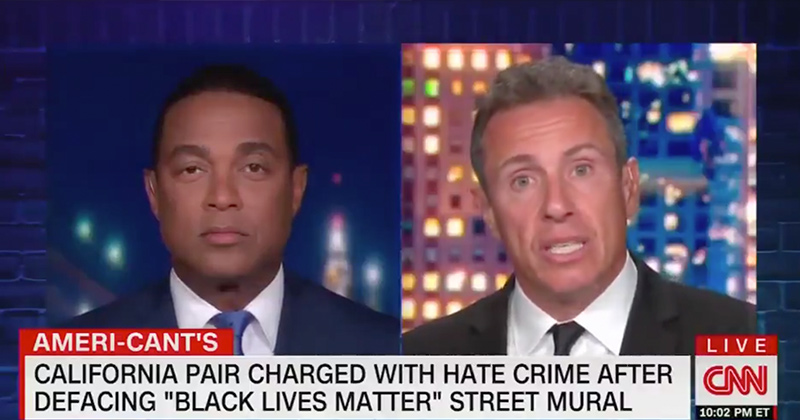 Cuomo claimed conservative outlets “lie about the pandemic” and “lie about what Black Lives Matter is about” in order to “create division.”

“Oh, ya. You see the right-wing media machine kick in when you see Trump’s poll numbers go south,” Lemon added.

Ghoulish behavior from CNN's Don Lemon and Chris Cuomo laughing about and mocking the rising crime in major U.S. cities, defunding the police, taking down statues, and erasing the Founders from our history.

Switching to a sarcastic tone, Lemon said, “Yeah. ‘Democratic cities are in chaos right now. Is this what you want from Joe Biden? And they’re gonna take your country away. And they’re taking down the statues.'”

“‘Crime is rising as they defund police!’” Cuomo chimed in.

Meanwhile, in six of the nation’s largest cities, 600 Americans have been murdered in just a six-week span as violent crime continues to surge amid calls to “defund the police.”

It’s not just the “right-wing media machine” asking where Black Lives Matter is when it comes to high murder rates in black communities.

Actor Terry Crews appeared to trigger Lemon during an interview on Monday night when he asked why “the Black Lives Matter movement has said nothing” about nine black children killed in Chicago in recent weeks.

“What does that have to do with equality though?,” Lemon asked.