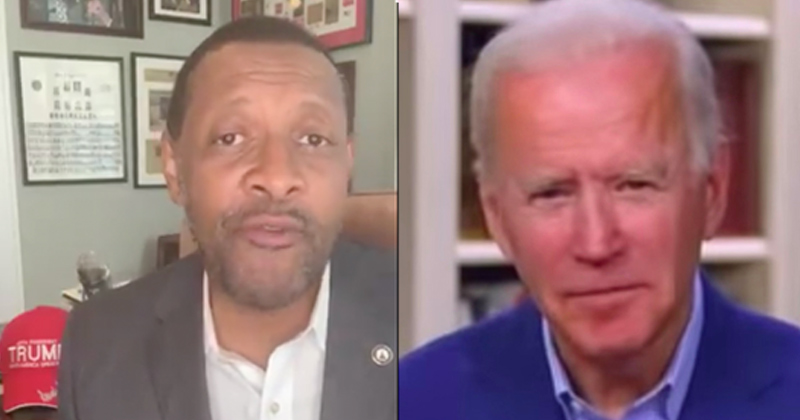 In a video message posted to Twitter Friday, Ga. State House Rep. Vernon Jones (D) rebuked comments made by Biden on the Breakfast Club morning show, where he told host Charlamagne the God, “Well, I tell you what, if you have a problem figuring out whether you’re for me or Trump, then you ain’t black.”

Taking offense to the remark, Rep. Jones said he’s tired of liberal democrats believing they can tell black people how to think.

I’ve been black all my life.

But I’ve never been anyone’s property, especially not @JoeBiden.

You’re not entitled to black support, Joe. You haven’t even earned it. pic.twitter.com/ZcqKC0dMak

“First of all, I have a problem with his choice of language. And secondly, this is a prime example of how liberal democrats, they love to dictate the way black people should think.”

“Well, you know what? I have a message for Joe Biden. Let me be clear about one thing: I ain’t voting for you, but I am black. And I am voting for President Donald J. Trump. You got me Joe Biden and those other liberals who think you can think for us? Now we’re not even black if we don’t vote for you? What an insult!”

Biden senior adviser Symone Sanders, who said in 2016, “we don’t need white people leading the Democratic party,” scrambled to defend Biden’s comments claiming they were made “in jest.”

The comments made at the end of the Breakfast Club interview were in jest, but let’s be clear about what the VP was saying: he was making the distinction that he would put his record with the African American community up against Trump’s any day. Period.

Joe Biden has finally found an adversary worthy of his formidable genius. Who is this mystery man? The answer may shock you…