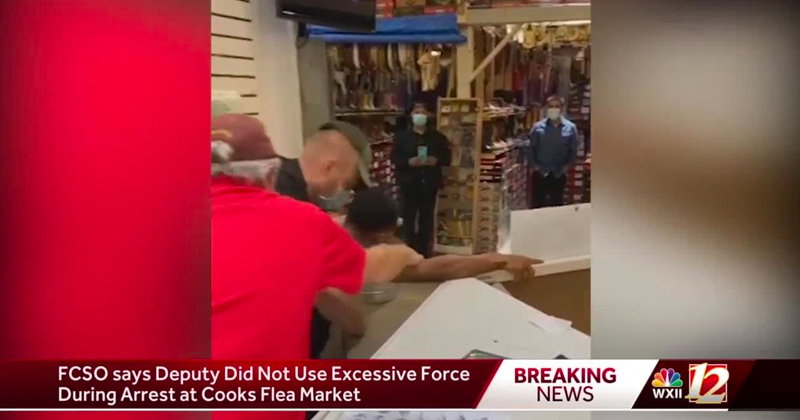 Footage from inside a flea market in Winston-Salem, North Carolina, shows a man who refused to wear a face mask being taken down by a sheriff’s deputy.

In video reviewed by the Forsyth County Sheriff’s office, Charles Redell Moody is seen refusing to comply with a masked deputy who wants him to put his hands behind his back.

“If you don’t stop you’re going to the ground,” the deputy tells Moody, who’s clutching a counter.

“Put your hands behind your back,” the deputy once again orders Moody, who replies, “No.”

At that point, the officer attempts to force compliance and a struggle ensues, with Moody appearing to resist the officer’s intent to handcuff him.

The officer is eventually able to get control of the situation with the help of others and handcuffs Moody, who says he was minding his own business.

“You were asked to leave,” someone tells him.

A flea market representative later told WGHP the man was told to leave after refusing to wear a face mask.

From the Charlotte Observer:

In a statement to WGHP, the flea market said a man was asked multiple times to wear a face mask but refused. He was also told to leave before a sheriff’s deputy who was working security came to escort him out of the building, according to the TV station.

According to the Observer, Moody claimed he was never asked to leave and had forgotten his mask. He was reportedly charged with “resisting arrest and trespassing.”

The Observer also reports a demonstration followed the arrest, not over North Carolina Gov. Roy Cooper’s ridiculous statewide mandatory face mask orders, but over race – because Moody is black and the officer involved is white.

Forsyth County Sheriff Bobby F. Kimbrough wrote on Facebook the department was reaching out to Moody’s family and the deputy to come to an agreement.

“We are reviewing all video of the incident in its entirety,” Sheriff Kimbrough wrote. “We remain committed to doing what is moral, what is legal, and what is right without any consideration for an individual’s race, ethnicity, sexual orientation, or religion. We are committed to protecting and serving our community, with integrity and transparency because this is OUR community.”

“I have spoken with both the individual in the video and his family, as well as the deputy involved. Together we will come to a resolution.”

Highlights from the Texas ‘We Can’t Breathe’ rally in Austin, Texas.