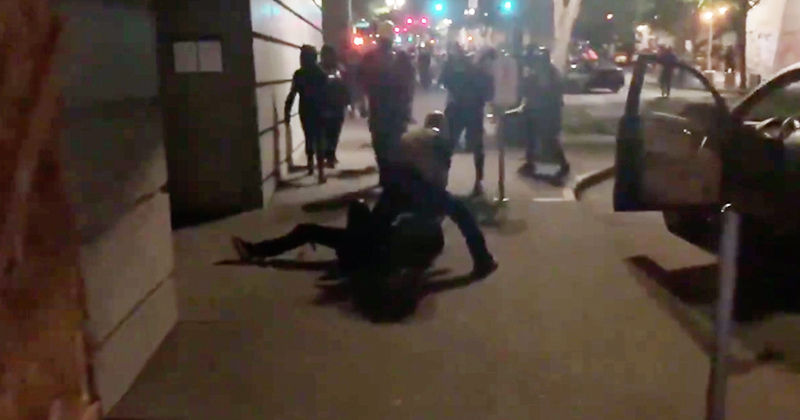 Footage posted online shows an individual hopping out of his car and bodyslamming an Antifa member who had just opened the man’s car door.

The video was allegedly shot during this weekend’s Antifa riots in Portland, Oregon.

“Do not ever, ever touch my vehicle again!” the man shouted as a group of Antifa miscreants scattered after seeing their comrade get pounded.

“That guy’s a fucking fed,” one of the communist agitators shrieked as the man got back into his vehicle.

The unidentified individual did appear to be wearing a bulletproof vest, signaling he could be in law enforcement or security.

Another person shouted, “He’s got arrows in the back of his car,” while the camera operator zoomed in on a bag in the back seat.

Over the weekend, masked antifa in Portland opened a black man’s car door during a violent protest. Watch how he responded to them: pic.twitter.com/p8gNADCkGM

However, this wasn’t the only incident captured on camera in Portland this weekend.

In the following clip, Antifa members arguing with an old man try to steal his bicycle and punch him in the face when he tries to get it back.

Antifa take an older man’s bicycle and then sucker punch him at the Portland riot. pic.twitter.com/5Gux2iJiWB

Another video of the incident shows the elderly man responding to accusations of racism, saying, “I’m not racist.”

“Yeah you are,” an angry communist shouted as others yelled, “Get the fuck out of here!”

This is the lawlessness that repeats every night as antifa and BLM militants claim control of downtown Portland. They confront an elderly man with a bicycle and say he’s not allowed in the area. Video by @livesmattershow pic.twitter.com/10cgQRanhu

In the next video shot in Portland this weekend, a man is harassed and assaulted by a mob of Antifa terrorists.

The group pours beer on his head and bumps into him as he tries to walk away, explaining, “I’m here every night as the joint fairy and they’re mad.”

That’s right, it appears the morons were assaulting a man who brings them free marijuana cigarettes on a daily basis.

The face-covered commies may have been upset that the man was filming, which is a common complaint among the lawbreaking left.

Antifa harass and assault person filming them at the public gathering in Portland. On social media they have released names and photos of non-approved media & cameramen. Recently they beat & robbed a livestreamer. Video by @livesmattershow pic.twitter.com/ijqzf3Fwsu

A disturbing video from the weekend shows the aftermath of an Antifa “protester” allegedly being hit in the face with a tear gas canister.

Meanwhile in Portland, a rioter gets hit in the face with a tear gas canister. pic.twitter.com/tKcBH3bPzo

Another video appears to show the same individual throwing a gas can back at police before being struck in the face and immediately dropping to the ground.

A person at the antifa/BLM Portland riot throws a gas canister at federal police. He is then hit by a less-lethal round, apparently in the face, immediately knocking him to the ground. Others carry him away and call for ambulance. Video by @TomasMorales_iv. pic.twitter.com/ungbjiMMUd

Regarding other happenings in Portland this weekend, Ngo reported a convenience store was robbed, public park restrooms were destroyed and the Elk statue was once again set on fire.

Peterson’s convenience store in downtown Portland has been broken into near the violent antifa protest. There are no police responding to the robbery.

The public toilets at the Portland park where antifa have gathered every day for weeks is destroyed. pic.twitter.com/nrhYW8vBvB

The Post Millenial covered two more stories from Portland this weekend which also highlight the stupidity of the city’s far-left activists.

In one story, BLM and Antifa members claimed a “white supremacist” shot a black male, but the assailant turned out to be another black male.

The second article exposed yet another case of confusion for Portland’s wannabe revolutionaries where they mistook a basketball poster showing an “okay” hand sign for a “white power hand symbol.”

“White Power symbol in window outside the US Court House,” an Antifa activist wrote on Twitter.

The Oregon US Attorney’s Office responded with an image of the poster in question, writing, “We can confirm the poster spotted in a Hatfield Courthouse window this evening is in fact a Portland Trailblazers poster.”

We can confirm the poster spotted in a Hatfield Courthouse window this evening is in fact a Portland Trailblazers poster. pic.twitter.com/Bnn85HSKp7

All in all, it seemed to be a terrible weekend for the Portland troublemakers.