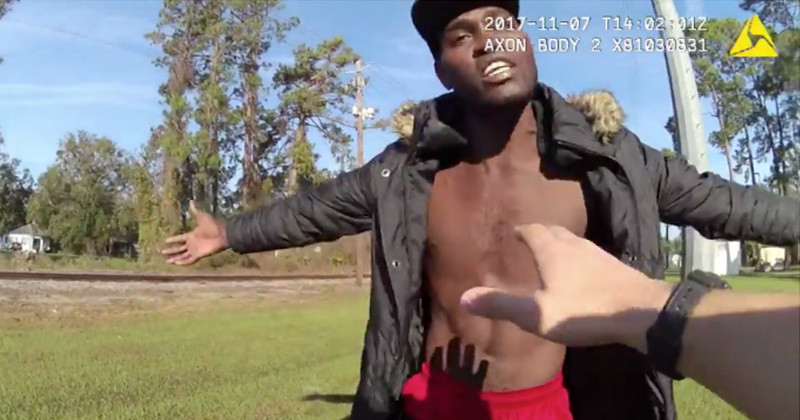 Body cam footage shows slain Georgia man Ahmaud Arbery being confrontational with police after he was approached during a routine encounter.

Arbery, 25, who was shot and killed by two white men in February, appears irritated while an officer tries to ask him why he’s parked in the middle of an open field near a park in Brunswick.

In the newly-released footage from 2017, Arbery asks why he’s being detained after the Glynn County PD officer runs his license.

“Why am I fucking with you?” the officer says, repeating Arbery’s question. “I’ll tell you why I’m here, because this area is known for drug activity,” the officer tells him, at which point Arbery becomes highly agitated.

“Bitch, you hit me with that shit, bitch you gonna be fucked up,” Arbery says denying he’s involved in drug activity, as the officer requests back up.

The officer then asks Arbery to place his hands on his car, to which he responds, “Why? I ain’t gotta do shit.” He then proceeds to resist an attempt by the officer to grab him.

Arbery finally submits to a search, which the officer claims is not a “search,” but merely a “check for weapons.”

As another officer arrives, Arbery makes a move toward his car at which point the backup officer pulls a taser, tells him to keep his hands away from his pockets and warns him to get on the ground.

TMZ reports the officer “tried” to use the taser, but that “the weapon malfunctioned.”

The tense situation is quickly resolved as Arbery grows more compliant with the presence of the additional officer.

While neither party seems to have handled the situation amicably, the footage does appear to demonstrate Arbery’s confrontational attitude towards others.

Footage of Arbery being killed in February emerged earlier this month, with many outraged the men who shot him were never charged.

In that video, Arbery appears to run toward a truck with two men, before attempting to fight with one of the men who jumps out of the vehicle holding a shotgun.

Nobody deserves to be murdered like this. Justice for #AhmaudArbery pic.twitter.com/5puDpcWDT2

The men claimed Arbery was a suspected thief who was casing places to rob, as footage had previously shown him scoping out a home under construction in the area.

On the other hand, the mainstream media asserts the video shows the equivalent of a modern-day lynching.

Filmmaker Jason Jones guest hosts The Alex Jones Show and is joined by the Hodgetwins as they break down the painful truth behind racism in America.