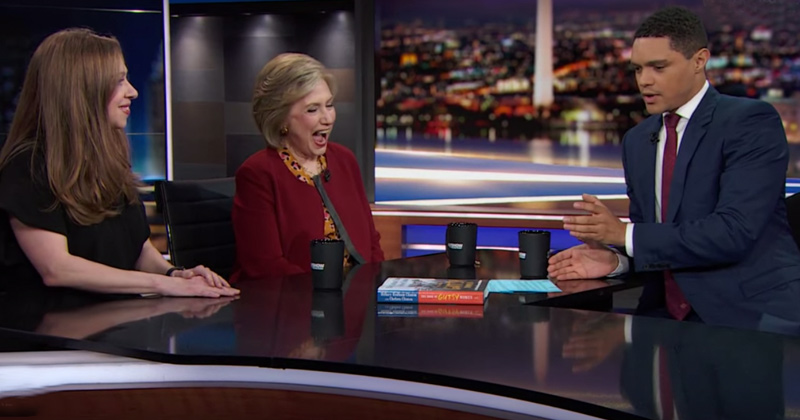 Former Secretary of State Hillary Clinton laughed when she was asked how she murdered billionaire pedophile Jeffrey Epstein, who was known to have ties to her husband, former President Bill Clinton.

Appearing on Comedy Central’s The Daily Show Thursday, Clinton was asked point blank by show host Noah Trevor, who segued into asking how her power can extend to kill a man in prison, but still couldn’t manage to attain the presidency.

“I have to ask you a question that has been plaguing me for a while, how did you kill Jeffrey Epstein?” Noah asked Clinton, who let out a maniacal laugh. “Because you’re not in power, but you have all the power. I really need to understand how you do what you do, because you seem to be behind everything nefarious, and yet you do not use it to become president.”

Clinton brushed the question away and pivoted to claiming it was part of a vast right wing conspiracy that’s picked up speed with the help of the internet.

“Well, it’s a constant surprise to me,” Hillary said. “Because the things they say, and now, of course, it’s on steroids with being online, are so ridiculous, beyond any imagination that I could have. And yet they are so persistent in putting forth these crazy ideas and theories. Honestly, I don’t know what I ever did to get them so upset.”

Many online have doubted official accounts of Epstein’s suicide ruling, and Clinton has emerged as one of the prime suspects for online theories due to her husband’s name appearing on “Lolita Express” flight logs at least 26 times.

The Clintons have also been at the center of numerous murder conspiracies accusing them of being responsible for suspicious deaths and suicides of people who surround them.

Epstein’s death in a New York federal prison cell was ruled a suicide, but recently a pathologist who witnessed Epstein’s autopsy stated his neck injuries appeared more consistent with a victim of strangulation, rather than a suicidal hanging.

RELATED: TEXANS TO PROTEST DEEP STATE KINGPIN HILLARY CLINTON IN AUSTIN SUNDAY, NOVEMBER 3RD AT 1 PM – The Deep State kingpin herself is scheduled to be speaking from 3-4, but Alex Jones wants Texans to be there with him to peacefully and lawfully protest the Deep State coup attempt against President Trump.