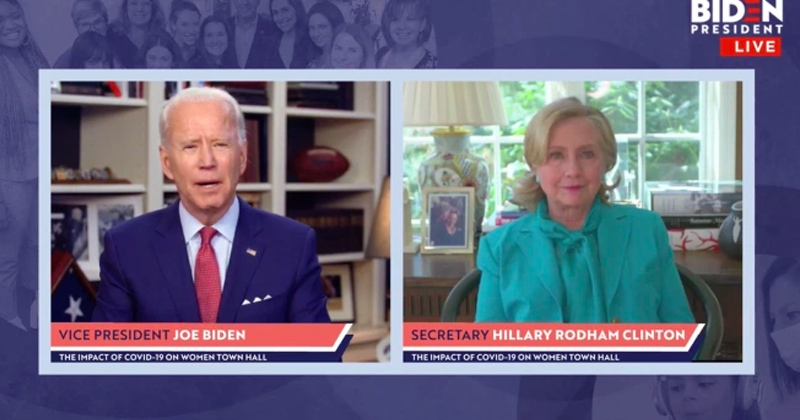 
“This is a high-stakes time, because of the pandemic. But this is also a really high-stakes election,” Clinton said during a virtual town hall Tuesday where she announced her endorsement of Biden.

Hillary Clinton: Coronavirus “would be a terrible crisis to waste”

“And every form of health care should continue to be available, including reproductive health care for every woman in this country. And then it needs to be part of a much larger system that eventually — and quickly, I hope — gets us to universal health care.”

“So I can only say, ‘Amen,’ to everything you’re saying, but also to, again, enlist people that this would be a terrible crisis to waste, as the old saying goes.”

“We’ve learned a lot about what our absolute frailties are in our country when it comes to health justice and economic justice, so, you know, let’s be resolved that we’re going to solve those once you’re elected president,” she told Biden.

Clinton’s choice of words allude to a quote from former Obama Chief of Staff Rahm Emmanuel, who used the phrase “Never let a good crisis go to waste” amid the 2008 financial crisis.

While the “Virtual Women’s Town Hall” was supposed to be centered on the “impact of COVID-19 on women,” Clinton and Biden were widely panned for ignoring recent sexual assault allegations made against the VP by former staffer Tara Reade, who came forward last month claiming Biden in 1993 digitally penetrated her while she worked under him.

Reade herself blasted Hillary’s endorsement of Biden Tuesday, labeling her a sexual predator enabler – despite voting for Clinton in 2016.

“I voted for Hillary Clinton in 2016. I voted for her in the primary. I’m a lifelong Democrat. But yet, what I see now is someone enabling a sexual predator and it was my former boss, Joe Biden, who raped me,” Reade said in a statement to Fox News.

She added: “I will not be smeared, dismissed or ignored. I stand in truth and I will keep speaking out.”

Infowars correspondent Richard Reeves joins The Alex Jones Show to expose what is behind the Dems openly backing Chinese intervention into American business, matters and elections.