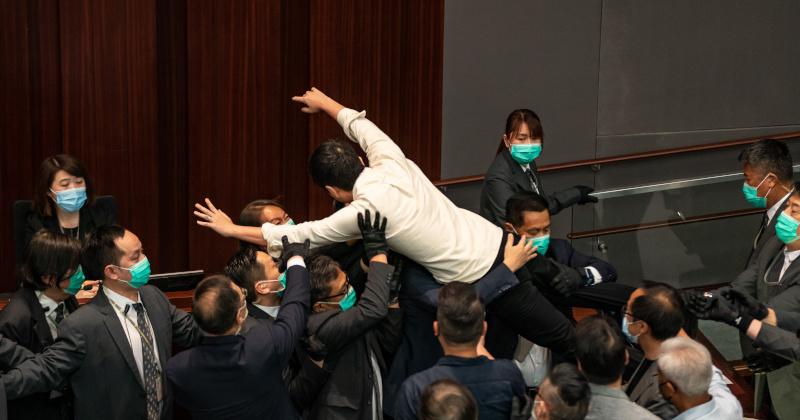 Fighting broke out between pro-democracy and pro-government lawmakers in Hong Kong on Monday, over a proposed law to ban insults of China’s national anthem.

The clashes erupted in the House Committee, a body that helps evaluate bills, with security guards dragging protesting pro-democracy legislators from the chamber and arguments flaring up between rival camps.

The scuffles began when pro-democracy lawmakers charged at security guards surrounding the pro-government lawmaker Chan Kin-Por, who assumed the role of committee chairman despite objection from the opposition.

Holden Chow from the pro-Beijing DAB party and Lam Cheuk-ting from the Democratic Party square off as opposing lawmakers and security guards tussle for control of the floor. pic.twitter.com/icNWpyJPrI

Some of the lawmakers were hauled out kicking and shouting, while others tried to jump over the security guards to take back the chairman’s seat. Members of the Democratic Party chanted  “foul play” and held a placard reading “CCP [China Communist Party] tramples HK legislature.”

One lawmaker threw torn-up pages of the legislature’s rulebook at members of the opposition, while another shouted, “It’s an illegal meeting. I hope you can leave immediately.”

The House Committee has been without a formal leader since October, meaning that no bills, including the one that criminalizes ridiculing or altering the national anthem, have made it to the legislature for a vote.

The controversial bill is expected undergo a second reading on May 27, despite the confusion over leadership in the committee.

Pro-democracy lawmakers have used what their rival camp has dubbed “malicious” filibustering and procedural delays to stop a vote for a new committee chair. “This ‘filibustering’ is no more than a way to sound out the anger of lawmakers towards the government,” the former leader of the Democratic Party, Albert Ho, told DW. “Not only on this legislation on the national anthem, but also the way it deals with criticism of police brutality.”

However, pro-government politicians have in recent weeks moved to break the stalemate, most recently with the installation of Chan as a stand-in to head the committee.

The Democrats say that the move is illegal, citing the opinion of the party’s own lawyers.

The clashes marked the second time in 10 days that legislators have resorted to physical confrontation over the procedures of electing a chairperson. Last May, fighting broke out in the legislature over the proposed extradition law that sparked Hong Kong’s biggest protests.

The law, which was later scrapped, would have allowed extradition to the Chinese mainland, fueling fears that dissenting voices could be extradited from Hong Kong to China.