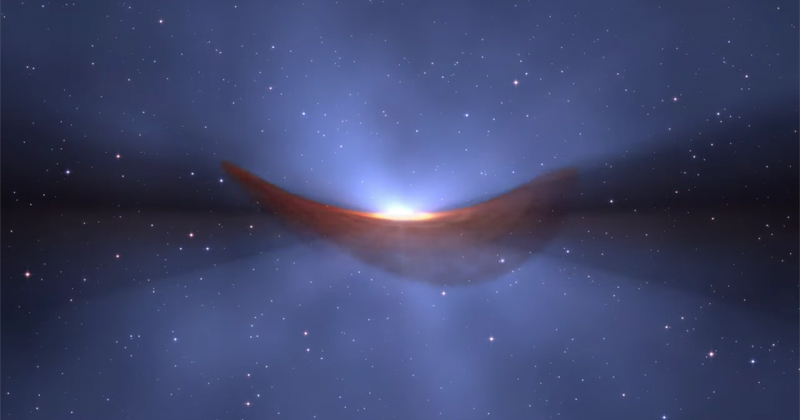 The Hubble telescope has peered deep into space and spotted shadows reaching out from a star and flickering, like the enormous wings of a gigantic cosmic bat. Mysteriously the cause of the “flapping” remains unconfirmed.

The spectacular celestial show is unfolding in a vast cloud of gas and dust 1,400 light-years away. The “bat’s wings” are caused by a disc of dust and gas around a young star called HBC 672.

Being around two million years old, the star is only a fledgling in astronomical terms, as most stars have been around for between one billion and 10 billion years.

Hubble photographed the stunning “Bat Shadow” in 2018 and the phenomenon got even more impressive this week when fresh research revealed the extraordinary flapping movement.

The shadow is caused by a disc of gas that surrounds the young star and astronomers speculate that the flapping motion is caused by a planet tugging on the disc and knocking it off-kilter.

“The shadow moves. It’s flapping like the wings of a bird!” said astronomer Klaus Pontoppidan of the Space Telescope Science Institute, who is the lead author of the new study.

The scientists believe that the disc is roughly saddle-shaped, with two peaks and two dips. The planet believed to be causing the phenomenon has an orbit that’s inclined to the disk’s plane, which explains the flickering of the “wings”.

“If there were just a simple bump in the disk, we’d expect both sides of the shadow to tilt in opposite directions, like airplane wings during a turn,” explained Colette Salyk, another member of the research team.

If the “flapping” isn’t caused by a planet the scientists already have a back-up theory, suggesting that it’s a smaller stellar companion which is orbiting outside the plane of the disc.