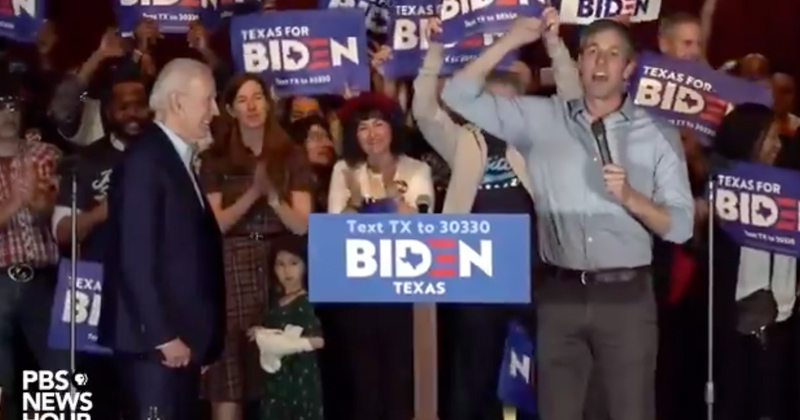 During a rally in Dallas, Texas, Monday evening, Rep. Robert “Beto” O’Rourke emerged on stage to throw his support behind Biden, who’s desperately vying for the state’s delegates on Super Tuesday.

“Ladies and gentlemen, tomorrow, March 3, 2020, I will be casting my ballot for Joe Biden,” O’Rourke announced, before introducing Biden in Spanish as “el proximo presidente,” or “the next president.”

Biden returned the favor by promising Beto a position in his administration.

At a cringe-worthy exchange between the two inside a Whataburger restaurant, Biden reiterated Beto would “change the face” of gun control.

Joe Biden: “if I win,” Beto O'Rourke, who wants mandatory gun confiscation, will “change the face” of gun control pic.twitter.com/h0ANUXP5qi

Recall that O’Rourke long ago revealed his disdain for the Second Amendment.

During a Democrat debate last September, Beto answered one question by going on an anti-gun rant in which he stated, “Hell, yes, we’re going to take your AR-15, your AK-47. We’re not going to allow it to be used against your fellow Americans anymore.”

Finally, after 3 presidential campaigns, Biden wins his FIRST primary. Can he get help from Obama in time? Biden’s face-plant interview with Chris Wallace shows he may be beyond help.