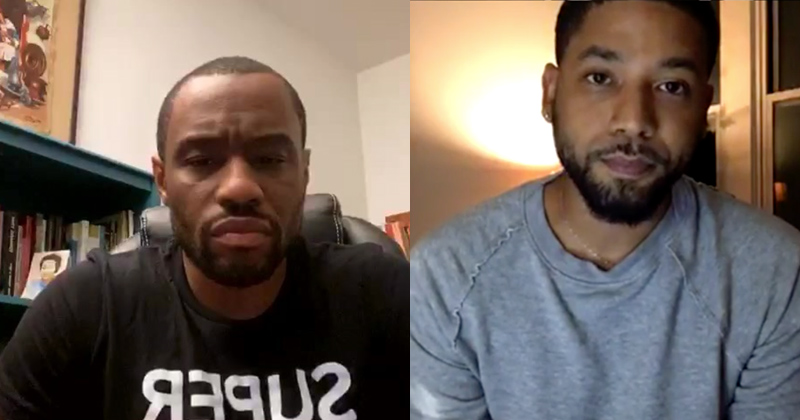 During a surprise appearance, the disgraced Empire actor said he was told to lay low while his trial clears up in court, as he proceeded to discuss his case at length, continuing to insist he did not stage a hate crime attack which he blamed on Trump supporters.

He also claimed he could see why people would think he staged the attack.

“When I step back, I can see the way they served the narrative to the people: That it was intentionally created to make people doubt from the very, very beginning. But at the same time, I’m not really living for the people that don’t believe,” he said.

“What happened in these last two years, it has humbled me in a way that nobody could possibly understand,” Smollett claimed during “his first interview in nearly two years,” according to Fox News. “Out of all these jokers in this entire situation, I am the only human being who has not changed his story one time.”

Check out the interview (Smollett appears at 40:16):

Marc Lamont Hill sits down with Jussie Smollett to discuss his case, police corruption, BLM, and more. First, activists Aislinn Pulley and Angela Davis offer critical insights on the history of policing, abolition, and the broader implications of the Smollett case.

Asked what the biggest falsehood about him is, Smollett responded media coverage has been skewed against him and he hasn’t had an opportunity to defend himself.

“Well, I mean that I did a hoax, obviously,” he stated. “I am a human being like everybody else… I ingest the media, I read the headlines, and all that type of stuff. I’ve been guilty of taking things at face value as well. But when you see that happening, and they talking about you, and you know – you know that it’s not true – somehow it becomes different.”

“It’s been frustrating to say the least. It’s been frustrating. It’s been beyond frustrating because to be somebody that’s so outspoken, to be somebody that speaks up for so much and speaks up about so many things, it’s been difficult to kinda be, you know, quiet,” Smollett told Hill, adding, “To not be able to say all of the things that you want to say, to not be able to yell from the rooftop because, I don’t think that people realize I’ve just been wrapped up in some form of a case for the last… approaching, in just a couple months, two years.”

“So it’s been beyond frustrating,” the actor continued. “And I think that I’m certainly not going rogue, and I’m still taking the advice of my attorneys and everything like that. I just don’t see, honestly, what staying quiet has done, where it’s gotten me,” he said. “Then there’s the bigger picture that it’s so much bigger than me.”

Smollett next claimed prosecutors were attempting to make an “example” out of him and that his persecution was political.

Elsewhere in the interview, Smollett argues he didn’t stage the attack because he had no reason to do so.

Smollett is currently facing trial on six counts surrounding false police reports he filed alleging he was the target of a hate crime in Chicago during the early morning hours of January 29, 2019.

Specifically, Smollett claimed he was attacked by two white men wearing red hats who shouted homophobic slurs, threw liquid on him, yelled, “This is MAGA country!” and slung a noose around his neck.

Later, two suspects of interest in the case, Abimobola and Olabinjo Osundairo, came forth alleging Smollett hired them to stage the hate attack, paying them $3,500 for the stunt in efforts to boost his image.

Smollett, the brothers claimed, “directed every aspect of the attack, including the location and the noose.”

Unfortunately for Smollett, a Cook County Judge on Thursday denied a motion to dismiss his case.