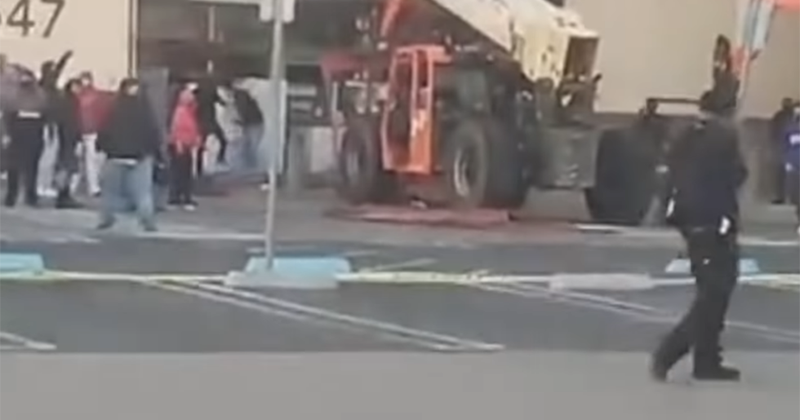 A particularly brazen attempt by looters to storm a store in Fairfield, California, has been caught on video, showing them commandeering what appears to be a telescopic forklift to force their way in.

A video has emerged showing vandals using heavy equipment on the doors of the Best Buy store in Fairfield, a city in Solano County, located between San Francisco and Sacramento.

Looters Use Telescopic Forklift To Break Into Best Buy In Fairfield, California pic.twitter.com/PKIkjAeKU6

As the man behind the machine’s steering wheel rams the doors of the electronics retailer store, several other people dressed in hoodies cheer him on and film the incident.

From Snapchat, looters breaching the doors of Best Buy in Fairfield using some kind of equipment (forklift?). pic.twitter.com/7aHZtvz70t

It is unclear how much damage was done to the store apart from the mangled doors, as looters melted away when they heard police sirens wailing in the vicinity.

Why the forklift was at the site where the looters grabbed hold of it is also unclear.

An array of other businesses were ransacked by looters in the county on Monday, as nationwide protests over the death of George Floyd in the hands of Minneapolis police last week turned violent and were marred by arson and looting.

Local Walgreens and Walmart stores in the city have not been spared the damage either. The instances of looting and vandalism prompted the local authorities to impose a county-wide curfew starting at 8 pm on Tuesday.

The curfew will stay in place until at least Thursday, with the county officials not ruling out that it might be extended further if police fail to quell the violence.

In one particularly concerning development, police reported that some 50 to 70 guns were stolen from a store in Vacaville, a city just to the north of Fairfield, also in the greater San Francisco Bay Area.