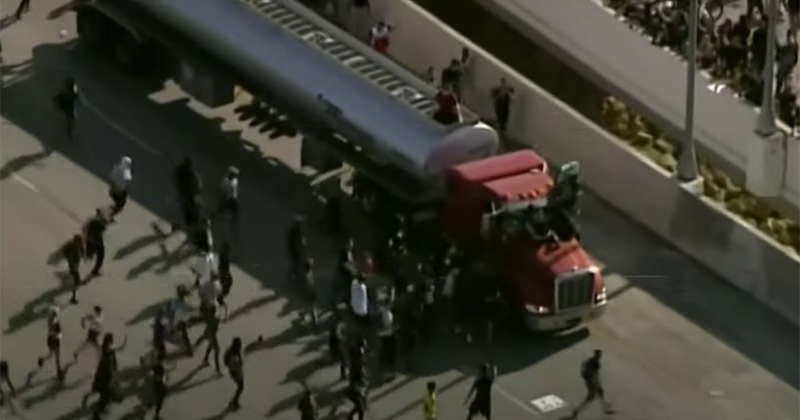 A disturbing incident in Minneapolis, in which a truck drove right into a crowd of protesters who were marching at a closed interstate road, has been filmed in every chilling detail by people at the scene.

The tanker semi drove along the westbound lanes of Interstate 35 when the road was full of people protesting over the killing of George Floyd at the hands of police. The road was closed for road traffic for the march.

One on-site video shows the moment the truck was stopped, with the cameraman yelling to people to get on the other side of the street and away from the potentially dangerous vehicle.

Reporter Questions MSM’s Role In Growing The Riots In America

Another one shows angry protesters pursuing the truck. “Get his f**king ass out,” somebody is heard shouting as people block the windshield of the truck with their bodies and drag the driver out.

#BREAKING: ground video of tanker truck driving through massive crowd of protesters on I-35W in #Minneapolis.

The terrifying chase was filmed from another angle. It shows people throwing cycles in front of the vehicle in an apparent attempt to stop it. “Hey, you can not hurt him,” the person shooting the video shouts to other protesters as they get the driver out of the cabin.

“Don’t hurt him! It defeats our purpose”

Breaking News: At a Minneapolis protest a man in the semi truck plowed thru the crowd.
The protesters got the guy out of the truck & jumped him.
Police maced the crowd & got the driver.
It is believed the driver is in police custody.#minneapolisriots pic.twitter.com/a95gCfp5Q2

The amount of anger seems palpable, but apparently the protesters managed to keep their rage mostly under control. According to the Minneapolis Department of Public Safety, the driver of the truck was injured in the altercation, but his life was not under threat.

From DPS Commissioner Harrington: From the footage we are seeing on @MnDOT cameras, it appears the semi was on I-35W as authorities were closing the road. It didn’t appear to drive through any barricades. Driver released from the hospital & under arrest. #MACCMN

He was put under arrest after being released from hospital. None of the protesters seem to have been hurt in the incident.