A mesmerizing – and alarming – new animation from NASA demonstrates just how dramatic the increase in near-Earth asteroids entering our Solar System has become over the last 20 years.

The video, based on data gathered by the Center for Near-Earth Object Studies, shows the huge surge of space rocks hurtling towards the inner Solar System.

Near-Earth Objects (NEOs) are asteroids and comets in orbits that come within 121 million miles (195 million km) of the sun, and also within roughly 30 million miles of Earth’s orbit around our star.

Data from January 1, 1999, to the end of January 2018 shows the spectacular increase in asteroid discoveries in the Solar System. The color blue represents near-Earth asteroids, while orange indicates main-belt asteroids between the orbits of Mars and Jupiter.

The footage starts with just faint speckles surrounding the Solar System in 1999 before growing more distinct over the next decade – and ultimately swarming Earth’s neighborhood in 2018.

NASA established, what is now known as, the Center for Near-Earth Object Studies in 1998 after a media frenzy surrounding the discovery of asteroid NEO 1997 XF11 suggested the Earth was doomed.

Some 18,000 NEOs have now been detected, roughly a discovery rate of 40 a week, out of a space rock population believed to be in the millions. The NEO observations program still has to fulfill the ambitious goal set by Congress of finding 90 percent of NEOs 460ft and larger by the end of 2020. 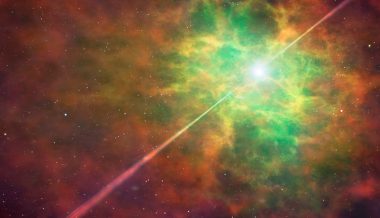