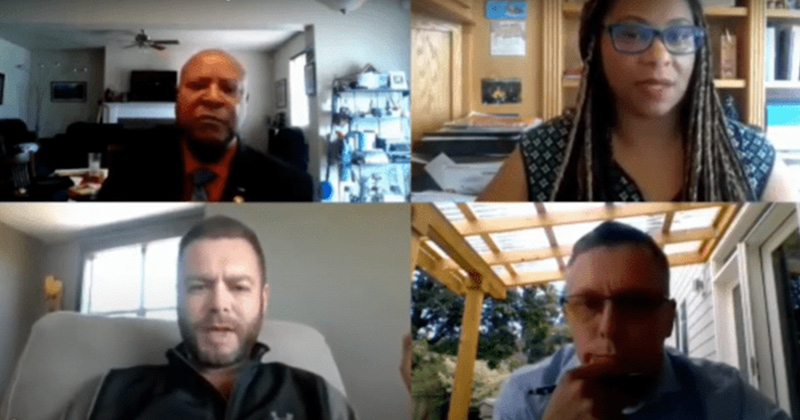 Democrat Oregon Rep. Janelle Bynum, the chairwoman of the state’s House Judiciary Committee, temporarily shut down a virtual hearing in July to prevent the deputy chief of the Portland Police Bureau from testifying about Antifa violence.

Bynum is currently pushing for widespread police reforms as the Oregon Capitol is locked down to the public due to Coronavirus.

Rep. Janelle Bynum has staked out a reputation as a harsh critic of the police.

She recently joined in a lawsuit to stop President Donald Trump’s federal agents from interceding in Portland, and she has said that she had the cops called on her while campaigning — earning wide media exposure — and that her daughter was racially profiled by a mall cop.

The Oregon Capitol Building, meanwhile, has been locked down since March. “Nobody is allowed into the Capitol except elected officials and staffers. Not even lobbyists,” said Breeana Sagdal, an Oregon lobbyist, in a conversation with NATIONAL FILE. “I can’t even get into the Capitol to do my job.” “They shut everything down I think sometime in March.” “They’re allowed to email their testimony over, but the lawmakers in the committees are not reading those pieces of testimony before voting for bills. The committees crafting these bills really could not care less…The only time they listen is when people are sitting in front of them giving their stories because they have to sit there and listen to it.”

“Rep. Janelle Bynum and Peter Courtney did not allow stakeholder input when they crafted these bills,” Sagdal said.

Senate Republican Leader Fred Girod stated: “This is the building of the people, and it is wrong for the super majority party to continue to lock Oregonians out of the legislative process. It is a symbiotic relationship: Oregonians have a right to be involved in the creation of legislation, and legislators need their input and advocacy to craft sound policies for the state. I shouldn’t have to say this, but we are elected to represent Oregonians, not bulldoze them to appease special interests.”

Roger Edwards, president of the Oregon State Fraternal Order of Police told NATIONAL FILE that “Are we invited to everything? No. Do I feel they really care about our input? Not really. But it’s coming and we either sit at the table and have some kind of rational conversation or in six months will we be invited back to have these conversations? A lot of these politicians are getting a lot of pressure from people in the community…Some of these legislators pushing these bills through don’t want input from law enforcement. A lot of their minds are made up….I wish we were more involved. I wish the legislature instead of rushing things through would have a conversation…They’re pressured to have something to push forward…No one knows what police reform means nor can they define it. Most legislators don’t know cops. They’ve never been on a ridealong. CSI did a lot of damage to law enforcement. After CSI came out, when people went to court jury members were asking questions like, ‘CSI did a DNA test in 12 hours why didn’t you do that? It’s all make believe stuff. Legislators base their opinions on police on what they see on TV, without doing follow up…Everything seems so anti police right now.”