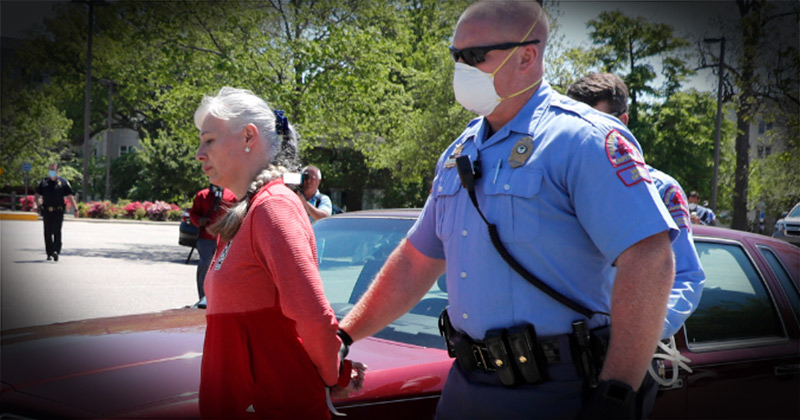 Over 100 patriots descended on the North Carolina legislative building in Raleigh to attend a tailgate-style demonstration held by the group ReOpenNC.

Citizens protested by honking their car horns every fifteen minutes and holding signs calling for the state to “open up.”

My educated guess is about 75-100 people now, with about half in their cars. Every 15 minutes or do demonstrators let loose with their horns. @ABC11_WTVD @ABC #abc1– @ABCPolitics #coronavirusNC #ReopenNC #StayAtHome pic.twitter.com/prKWSeSn3G

The protesters, many of whom are small business owners, are calling for the reopening of the economy.

Police asked the demonstrators to leave, saying they were in violation of the Governor Cooper’s social-distancing guidelines and limits on public gatherings.

“You can not gather in protest.” A group of protesters has gathered in Raleigh to push for N.C. businesses to be reopened. Arrests have been made – WBTV /@MichaelWNCN

“We are in violation of Comrade Cooper’s order,” Leonard Harrison of Mebane told The News & Observer. “If I get locked up today, I’m OK with that. As North Carolinians, we need to get back to work.”

In the video below, a Raleigh Police officer tells the protesters, “If you all leave, no harm no foul. If you fail to leave, if you do not disperse, you will be subject to a physical arrest and taken to Wake County Jail.”

Protesters responded by yelling that the Constitution protects their right to assemble.

“I have a right to peacefully assemble,” one woman told police officers as they bound her hands with a zip tie. “God bless America.”

She was charged with “violation of an executive order.”

The Raleigh Police Department responded to a Twitter user who asked, “What part of the governor’s order was violated here?” by claiming, “Protesting is a non-essential activity.”

Protesting is a non-essential activity.

The ReopenNC group plans on holding a rally every Tuesday until Governor Cooper ends the restrictions.

Similar protests are taking place throughout the country with events being held in Ohio, Michigan, Texas, Wyoming and Idaho.

ABC 11 Eyewitness News covered the protest in the following report:

Check out more pictures from the event below: