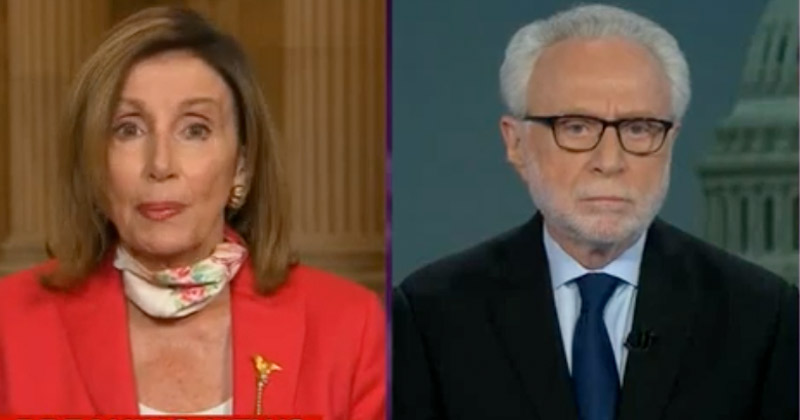 House Speaker and insufferable harpy Nancy Pelosi referred to COVID-19 as the “Trump Virus” during an interview Tuesday, blaming the president for making the coronavirus pandemic “worse.”

“With the president’s comments today, he recognized the mistakes that he has made by now embracing mask-wearing and the recognition that this is not a hoax; it is a pandemic that has gotten worse before it will get better because of his inaction, and in fact clearly it is the Trump virus,” the Democrat career politician from California told CNN’s Wolf Blitzer.

Elsewhere in the interview, Pelosi claimed Trump was wrong for not mandating face masks sooner, and claimed he refused to wear one because of “a manhood thing.”

“I think a good deal of what we have suffered is clearly the Trump virus,” Pelosi added, agreeing with Blitzer that “thousands of Americans” had died due to the president’s policies.

The president, on the other hand, pointed out during a recent interview with Fox News’ Chris Wallace that NIH director Anthony Fauci and US Surgeon General Jerome Adams both at the start of the pandemic told the public not to wear face masks.

“That being said, I’m a believer in masks,” he said. “I think masks are good.”

Trump on Monday during a coronavirus task force briefing also called on Americans to wear masks, saying, “Get a mask. Whether you like the mask or not, they have an impact. They will have an effect and we need everything we can get.”

Pelosi’s reference to COVID-19 as the “Trump virus,” belies its true foreign origins, which President Trump calls attention to by referring to it as the “Chinese virus.”

We are United in our effort to defeat the Invisible China Virus, and many people say that it is Patriotic to wear a face mask when you can’t socially distance. There is nobody more Patriotic than me, your favorite President! pic.twitter.com/iQOd1whktN