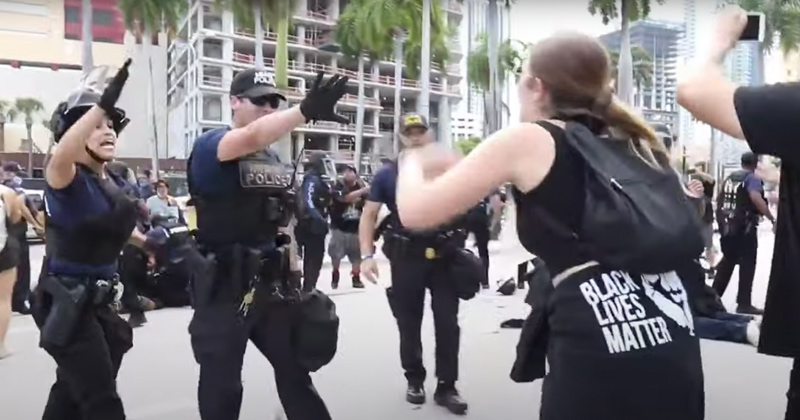 Cameras were rolling when rioters attacked a police vehicle and were subsequently confronted by Miami PD.

Footage from Wednesday shows an unmarked police cruiser slowly making its way down a crowded street when rioters get in front of the car and begin attacking it.

As the car rolls to a stop, four officers emerge and attempt to apprehend violent protesters as more officers show up.

Officers arrested seven rioters one day after statues of Christopher Columbus and Juan Ponce De Leon were defaced with images of communist propaganda, including a hammer and sickle.

Anyone with information on other suspects who vandalized the statues or police vehicle is urged to contact the Miami Police Department at (305) 579-6111. Those with information who wish to remain anonymous may contact @CrimeStopper305 pic.twitter.com/x5r40UEQH5

“Miami police officers identified the suspects via surveillance cameras, and after giving an exact description of the suspects, our ground officers moved in and arrested the suspects who committed the vandalism,” a Miami PD news release stated.

“While initiating the arrests, several protesters assaulted our officers and damaged a police vehicle. We were able to arrest a total of 7 of the violent protestors. The peaceful protestors were not arrested.”

The news release continued: “In the City of Miami, we support peaceful protests but there will be zero tolerance for those who hide behind the peaceful protesters to incite riots, damage property, and hurt members of the public or our officers.”

The CIA & the Pentagon have a manual for overthrowing countries with civil war. Oddly enough, it looks exactly like what is happening today in America.