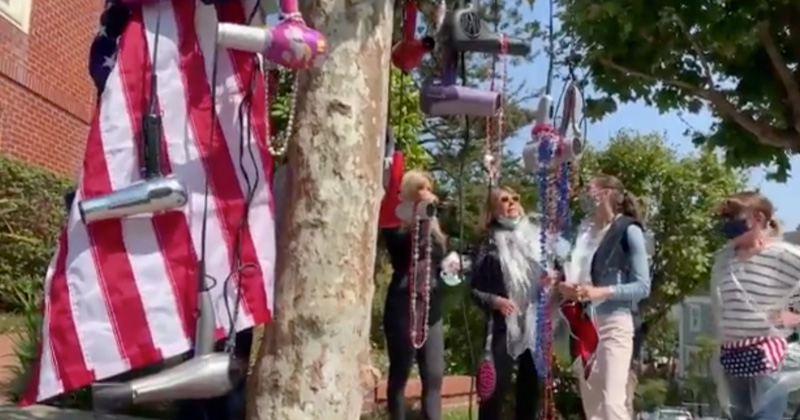 Protesters decorated trees outside Nancy Pelosi’s home with curlers and blow dryers, angered over her recent visit to a California hair salon in violation of COVID lockdown orders.

Protesters have gathered in front of Nancy Pelosi’s San Francisco home and are stringing up curlers and blow dryers on a tree after a video surfaced of Pelosi getting her hair done indoors/maskless at a SF salon @sfchronicle pic.twitter.com/v6KVORByaP

The protesters reportedly showed up outside Pelosi’s San Francisco home Thursday, describing themselves as “angry salon customers,” according to the San Francisco Chronicle’s Jessica Christian.

None of these demonstrators in front of Nancy Pelosi’s home are salon owners or workers. They’ve all described themselves “angry salon customers” who want to get their hair and nails done @sfchronicle pic.twitter.com/fVMVM2Aajl

Demonstrators have formed a hand-holding circle around a tree with blow dryers and hair curlers hanging in front of Nancy Pelosi’s SF home @sfchronicle pic.twitter.com/9MsXqdZjhy

Protesters also decorated the tree with a US flag, after which they called it a “liberty tree.”

The tree of blow dryers and curlers has been decorated with an American flag and dubbed the Freedom Tree by protestors in front of Nancy Pelosi’s home @sfchronicle pic.twitter.com/0dY9SU4JeV

The official remarks from the demonstration are over, now the group is split in two discussing their opinions of Nancy Pelosi and the salon video situation @sfchronicle pic.twitter.com/F1SBZv5Dt3

The protest comes in the wake of a controversy that erupted Tuesday after footage emerged of Pelosi visiting a San Francisco salon mask-less, in violation of COVID-19 lockdown orders forbidding salons from being open.

On Wednesday, Pelosi blamed the salon for booking her hair appointment.

The incident culminated Thursday when White House press secretary Kayleigh McEnany looped footage of Pelosi walking through the salon during a press briefing, followed by critical tweets from President Trump.

Crazy Nancy Pelosi said she was “set up” by the beauty parlor owner when she improperly had the salon opened (and didn’t wear a MASK!). Does anyone want a Speaker of the House who can be so easily SET UP?