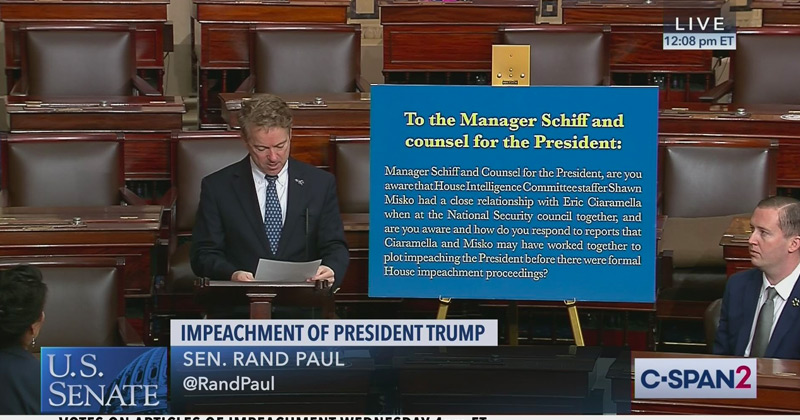 Paul proceeded to read the question, which contained the reported whistleblower’s name, contending it did not concern a “whistleblower,” but rather questioned whether the court was aware Obama holdovers at the National Security Council may have conspired to impeach Trump ahead of impeachment proceedings.

On the floor of the U.S. Senate, Sen. @RandPaul reads and displays the question which Chief Justice Roberts declined to read last week during the Impeachment Trial. pic.twitter.com/nxZb255IbU

“Now during the proceedings, I asked a question that was disallowed. And I’m going to ask that question again this morning, because the Constitution does protect debate and does protect the asking of questions,” Paul stated.

“My point is, is by having such protection, such overzealous protection, we don’t get to the root of the matter of how this started,” Sen. Paul said. “‘Cause this could happen again.”

Last Thursday, Sen. Paul’s question was refused after being submitted to Chief Justice Roberts, who presided over the proceedings.

“The presiding officer declines to read the question as submitted,” Roberts said, prompting a firestorm over whether the move was legal.

Democrats and radical leftists are now calling for Rand Pauls arrest after a question from the Senator was refused in the trial against the President.