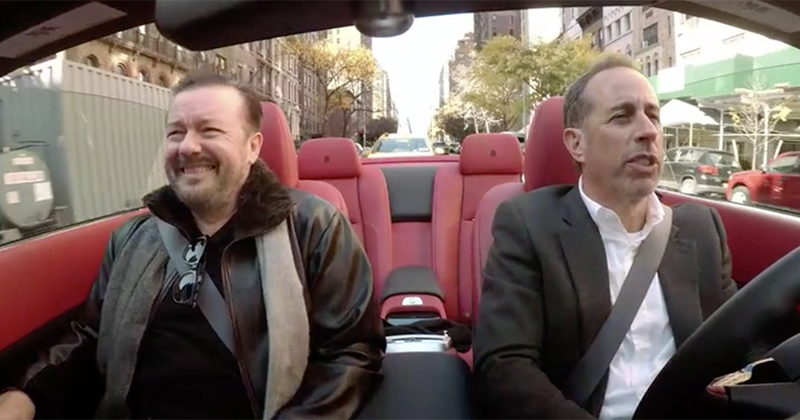 British Comedian Ricky Gervais and his US counterpart Jerry Seinfeld recently discussed the difficultly of being comedians in a society where a swathes of people choose to be permanently offended at anything, and were immediately beseeched by people who were offended by what they said, proving their exact point.

The background of the piece was this debate about whether to leave in a comment made by Seinfeld, which was purposefully supposed to rile up the snowflakes.

“That’s one of the best and worst things you’ve ever said.” Gervais commented, knowing exactly what would unfold if it was left in.

The two then discussed the erosion of free speech, in the context of comedy.

“I joke about really terrible things. And I know they’re terrible. Of course.” he continued, adding “And whenever a new thing comes out that’s raw and sensitive, people say, ‘You don’t understand.’ I go, ‘No, I do understand.'”

“I know this is bad, I know the Holocaust was bad, I know AIDS is bad. It’s the joking about it that you don’t like ’cause it’s your thing. I was saying about freedom of speech. You should be able to joke about anything and they say things like, ‘Oh, you agree with Hitler, then.'”

Gervais then stated that comedians are in a “fight for the right to joke about anything.”

“Do you think it’s ebbing away in this culture?” Seinfeld asked, to which the British comedian replied “This is the thing about freedom of speech – everyone agrees with it, until they hear something they don’t like.”

Seinfeld and Gervais talking about how Chinese people look the same = a low point for 2019 TV. Also: Jerry and Eddie Murphy making jokes about homeless people while zooming around LA in a Porsche https://t.co/Gnd8p36X7x

I get what they were trying to do, but in the end, the Jerry Seinfeld episode(s) of “Comedians in Cars” with Ricky Gervais is two white dudes comforting each other about how “not” racist they are, and it’s super unfortunate. #ComediansInCarsGettingCoffee

the ricky gervais episode of "comedians in cars getting coffee" singlehandedly made me think that jerry seinfeld is racist and a psychopath. really should've cut the china joke out. 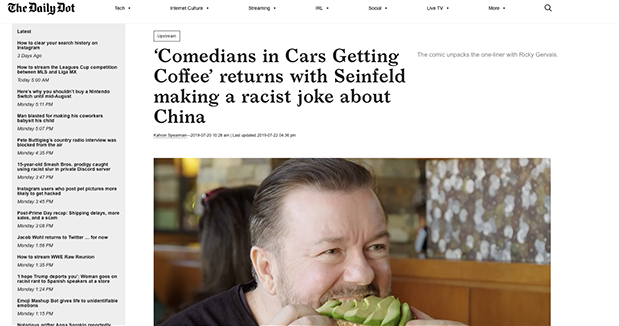 Someone please explain the point of all this to these morons:

I'm with you on the latter being offensive, but you've missed the point of what they were doing with the Chinese joke; It isn't a joke about the Chinese, it's a joke about racists, and how awful it is to make comparisons like that.

It has “Comedians” in the title for a reason. It’s not called “Social commentary by acedemics in cars getting coffee”

OK, this is hilarious, because I was just watching this scene where they are like "the internet is going to be jerks about this" about 3 seconds ago. LITRALLY.

First, it was a joke. Second, he’s trolling you and you don’t even know it.

They are comedians. They tell jokes. You have no sense of humor.

Whether you like Gervais’ comedy or not, you have to admire the way he simply cannot stand idly by as surface dwelling PC idiots continue to fundamentally damage society and attempt to replace cultural richness with shallow neo-puritan dross.